50%
Tweet
Good Technology has filed patent infringement lawsuits against competitors MobileIron and Airwatch citing four of the company's 75 patents. Good's patents are broad and basic to mobile device management functionality, raising the question of whether all of the scores of players in the MDM space have to go through the Good tollbooth.

Good, best-known lately for its containerization solution to securing mobile phones and tablets, announced on Wednesday that it has filed the legal actions against native mobile management companies MobileIron and AirWatch, shaking the mobile device management space. Security and management for mobile devices have become important as corporate information makes its way onto employees' personal devices.

"Because we hold over 75 patents, many of which are early, highly-cited, foundational patents in the field, and because MobileIron and AirWatch hold only a single patent between them, we believe that this lawsuit will be a bet-the-company case for them and that the court will grant an injunction," Good CEO King Lee said. Good says it has spent hundreds of millions of dollars on research and product development, while claiming that MobileIron and AirWatch don't innovate and have no original technology.

MobileIron claims that its toolkit speeds up mobile device management.

Good began in 1996 as Visto Corporation and now has over 520 employees. AirWatch was founded in 2003 and has over 700 employees. MobileIron was founded in 2007 and has over 500 employees. Good began in the day when email was the main security focus, and companies needed to allow workers to access corporate email when they were traveling. Good was officially created in 1999, during the heyday of MP3 players and Blackberry 957 devices. Good was able to purchase more patent protection through acquisitions and litigation settlements, including some nasty ones with Research in Motion (RIM).

According to a blog post, the patents Good filed in the lawsuits include:

We contacted both AirWatch and MobileIron for comment. "We have not yet seen the complaint and have no comment until we review it," said Clarissa Horowitz, director of communications of MobileIron. AirWatch's Victor Cooper said, "As a corporate policy, we don't comment on legal matters." 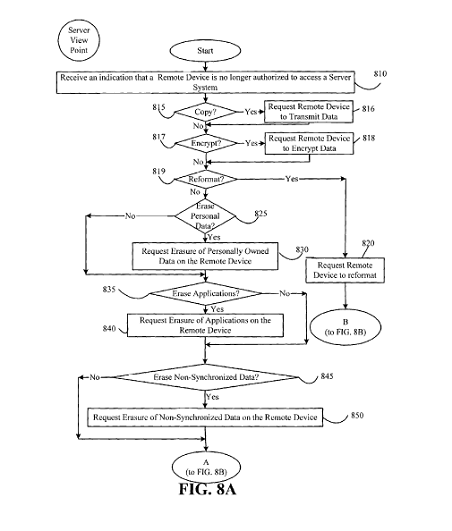 From the '606 patent: "...a flowchart illustrating a method of accessing network data from a remote site in accordance with the present invention."
We welcome your comments on this topic on our social media channels, or [contact us directly] with questions about the site.
Comment  |
Email This  |
Print  |
RSS
More Insights
Webcasts
5 Steps to Integrate SAST into the DevSecOps Pipeline
Cloud Security Threats Enterprises Need to Watch
More Webcasts
White Papers
Using AI to Power AppSec
Simplify Your App Security
More White Papers
Reports
Can You Spare 10-12 Mins to Help Us Out with a Survey on Tech Trends?
Got 7 Minutes? Dark Reading Needs Your Help With Our Survey on Incident Response
More Reports