50%
Tweet
54th David Packard Media of Achievement Award winner Reid Hoffman believes that making the world better should be a core mission in every organization, not just an afterthought. 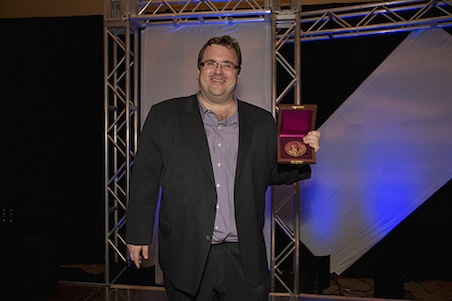 Hoffman, who is known as a co-founder of LinkedIn, and is a partner at Greylock Partners, spoke at the TechAmerica award dinner about the need for companies to encourage the enterpreneurial spirit within their ranks. "We need to figure out how to innovate at larger companies," he said, rather than rely on the model of larger companies acquiring startups for sustaining innovation.

Hoffman also spent time explaining how the tech community should apply its innovative processes to develop more than just scalable products. It should also apply innovation to developing new models for non-profit organizations, he said.

A few companies recognize that it is not just about inventing products, he noted. For instance, there's the Salesforce model and the Google.org model. These companies have a vision of how they will change the world and how they can make a philanthropic impact, Hoffman said. It's important to have a mission culture.

Using LinkedIn as another example, he noted that LinkedIn for Good is an initiative aimed at leveraging its platform for social good by asking: what kind of things can we bring inside the network to enable micro volunteering? By using the connected platform, Hoffman said, non-profits are able to recruit the right people from the boards of other non-profit organizations in the network.

Hoffman said entrepreneurs should be trying to figure out how to build new kinds of non-profits, ones that are modeled after companies that were built for profit. He gave several examples. The nonprofit Kiva.org uses the Internet and a micro-financing network to lend small entrepreneurs money so they can create a better life for themselves. Code For America in Oakland, Calif., is using the tech community to help improve local government.

We welcome your comments on this topic on our social media channels, or [contact us directly] with questions about the site.
Comment  |
Email This  |
Print  |
RSS
More Insights
Webcasts
Getting the Most from Threat Intelligence
12 Ways to Defeat Multi-Factor Authentication and How To Stop the Bad Guys
More Webcasts
White Papers
NetFlow vs Packet Data
[Exclusive InformationWeek IT Trend Report] The Cloud Gets Ready for the 20's
More White Papers
Reports
Can You Spare 10-12 Mins to Help Us Out with a Survey on Tech Trends?
Got 7 Minutes? Dark Reading Needs Your Help With Our Survey on Incident Response
More Reports