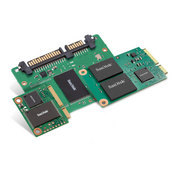 The SanDisk SSD U100 and iSSD i100 feature SATA III interfaces and can transfer data, improve web browsing speed, and other functions at about twice the speed of the SanDisk P4 drives they are intended to replace, the company said.

The new drives have a low-power architecture to reduce power consumption to as low as 10 watts during "slumber mode," which enables longer battery life in ultra-portable computers and tablets.

"Our deep involvement with key ecosystem stakeholders allows us to align our products with fast-moving market requirements," said Rizwan Ahmed, director, SSD product marketing at SanDisk, in a release. "We develop low-power, high-performance SATA SSDs that optimally fit into a growing number of thin client devices."

The U100 is designed for ultra-thin laptops and provides up to 256 GB of storage in a drive that fits into a slimmed-down SATA SSD, mSATA, or mSATA mini casing at 2.5 inches. The U100 features a SATA III interface and has a benchmark of 450 bps read speed and up to 340 bps write speed, which is twice the speed of previous P4 SSDs. The drive is available in 8 GB to 256 GB capacities.

The U100 drive was designed in conjunction with Asus for high performance and lower power consumption. Asus is featuring the drive in its new ultra-thin UX21 laptop.

While the cost of SSDs has kept consumers at bay, Gartner predicts that in 2012 the SSD price will drop to $1 per gigabyte and entice consumers to fuel strong demand.

We welcome your comments on this topic on our social media channels, or [contact us directly] with questions about the site.
Comment  |
Email This  |
Print  |
RSS
More Insights
Webcasts
Building a Strategy for Detection and Response
Chatbots for the Enterprise
More Webcasts
White Papers
Cybersecurity Research: 2019 AWS Cloud Security Report
Securing Real-Time Communications for Dummies Book
More White Papers
Reports
How Enterprises Are Developing and Maintaining Secure Applications
The Definitive Guide to Managed Detection and Response (MDR)
More Reports