Whither Windows After Sinofsky? - InformationWeek

50%
Tweet
The resignation of Microsoft Windows president Steven Sinofsky raises many questions about a platform that is going through perhaps its most radical changes ever. Is Microsoft unhappy with his work on Windows 8 and Surface? Or is this just a personal career move for Sinofsky?

The resignation of Microsoft's head Windows guy, Steven Sinofsky, raises many questions. I've known Sinofsky professionally for a long time, back to when he was far less senior in the company. I've seen him move up the ladder to the point of running Windows and moving it through what is perhaps its most challenging period. To meet those challenges he pushed it through its most extreme changes. The only change to rival its current transformation was the move to Windows NT and 32 bits in the early 90s. Those were still just for PCs and the user interface changes now look conservative in retrospect.

The new Windows 8 style, formerly and still unofficially known as Metro, is a really big gamble. It seems that either it will be a big success or it will be a disaster. It's too soon to tell. 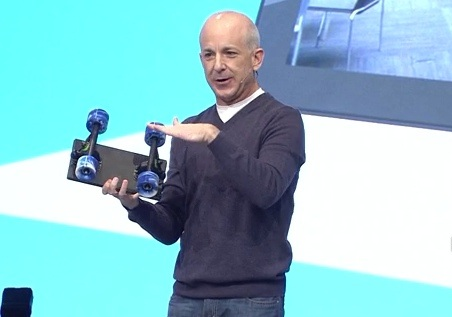 At the Windows 8 launch event, to emphasize how sturdy Surface is, Microsoft made a skateboard with a Surface as the platform and showed a video of Sinofsky skateboarding on it. They also did a live drop test of a Surface on stage. Click here to see some Surface drop test videos.

It's probably too soon to tell for Microsoft, too, which makes me think the resignation was not a reaction to how Windows 8 is doing so far. So why would a 47-year-old quit a job at a high-profile company where he's done really well? I doubt he's retiring. Perhaps the speculation that he's the heir apparent post-Ballmer is off and he's not really a candidate. That would mean that, for the first time, Sinofsky has hit the career ceiling at Microsoft. That would explain things.

Remember, Ballmer himself is only 56 years old, hardly ready to go out to pasture. I have a lot of respect for Ballmer and I think he gets a bad deal from the press, but I can see how he'd be a tough boss. The only thing that gives me pause about this theory is how quickly the resignation came after the Windows 8 launch. That suggests to me either that they wanted him out quickly or he wanted to get out quickly -- probably the latter.

I won't waste time worrying about Julie Larson-Green, Sinofsky's replacement as president for Windows and Windows Live, but I will worry about Windows and all the users and companies who rely on it. The huge gamble that is Windows 8 is a gamble for them, too.