Microsoft has sold 60 million Windows 8 licenses since the product's launch and users have downloaded 100 million apps from the Windows Store, according to a top Microsoft officer speaking at CES 2013 today.

Microsoft has sold 60 million Windows 8 licenses since the product's launch and users have downloaded 100 million apps from the Windows Store, according to Windows Chief Marketing Officer and Chief Financial Officer Tami Reller, speaking at the J.P. Morgan Tech Forum at CES 2013 today. The numbers were reported in a Microsoft Blogging Windows entry.

The 60 million sales includes new licenses sold directly, upgrades and sales to OEMs for new devices. The company didn't break down the figures by these categories.

The blog states that the Windows 8 sales trajectory is similar to that of Windows 7 after its launch. Windows 7 enjoyed a more enthusiastic reception from the press and community, but the sales numbers indicate that users aren't as picky as the critics.

At the same time, Microsoft said that more than 1,700 systems have been certified for Windows RT and Windows 8. Microsoft pulled out of exhibiting at CES after last year, but the company has some presence this year to support OEMs showing Windows products.

The sales of Windows 8 and RT systems supports the claim of 100 million app downloads. Windows RT systems, such as Microsoft's Surface, can only install apps from the Windows Store. 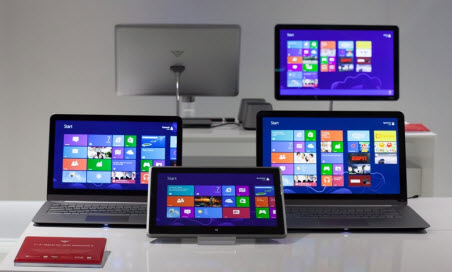 We welcome your comments on this topic on our social media channels, or [contact us directly] with questions about the site.
Comment  |
Email This  |
Print  |
RSS
More Insights
Webcasts
Architecting Security for the Internet of Things
The Pesky Password Problem: Policies That Help You Gain the Upper Hand on the Bad Guys
More Webcasts
White Papers
The $500,000 Cost of Not Detecting Good vs. Bad Bot Behavior
Your Security Team's Practical Guide to Implementing Automation
More White Papers
Reports
Special Report: Edge Computing: An IT Platform for the New Enterprise
2020 State of DevOps Report
More Reports