Designer Scott Schaedle feels that user interfaces would look and function much better if developers simply followed a handful of good design practices.

When Scott Schaedle looks at user interfaces found on the web, point of sale devices, information kiosks and various types of consumer and business systems, he often sees screens that look slick and attractive, yet operate poorly. He also notices a large number of ugly UIs that fail in just about every way possible.

Founder and president of Quore, a company that specializes in creating hotel management systems, Schaedle knows that good UIs are produced by designers with skill and insight into the ways people interact with systems.

Schaedle founded Quore in 2012 after identifying the need for a solution to revolutionize and streamline all aspects of hotel service operations. Raised in a family rooted in the hospitality industry, Schaedle’s hotel operations background -- combined with his advertising and graphic design expertise -- inspired him to create Quore and, in turn, a series of increasingly intuitive UIs.

Good UI design relies on strategic, intentional design decisions -- typography, color, and hierarchy -- to take the guesswork out of a decision path or process. "For example, when our designers were creating action buttons in a screen for a housekeeper doing a room cleaning, the housekeeper may have 10 possible actions to take, but we only displayed the most common actions, tucking the rest away into a menu of 'more options'," Schaedle says. Stripping down the interface to only show the most important actions is one way design can impact the user experience and remove the guesswork for the customers." 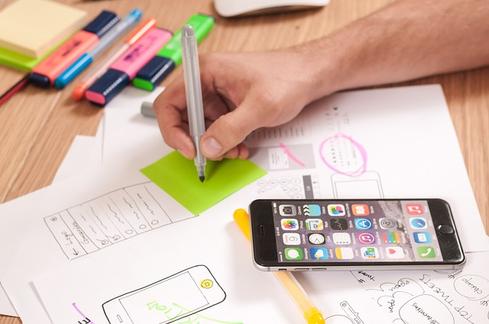 Schaedle believes that a clear user path is essential to a good UI. "Users should know what their options are now and where they need to go next," he says. "This type of intuitive design creates a sense of security for users instead of forcing them to figure it out for themselves or to guess. "

Graphic designers must understand the importance of perception. "People first see shapes, then color, then content," Schaedle says. "By taking this into account, designers can create products that are intuitive and easy to use. Start by first sketching the product, then add color to bring the visual to life."

Schaedle feels that great design requires a careful approach to color choices. "Color invokes emotion and has the power to affect behavior," he says, noting that when designing Quore it was important to incorporate features that thoughtfully take color into consideration. "One feature notifies employees with brighter warning colors when a room cleaning has gone into overtime, another when rooms are flagged for maintenance," he explains.

These days, given the large number of fixed and mobile devices appearing on the market, it's important to create UIs that can accommodate a wide range of platforms without confusing or inconveniencing the user. "First, it’s important to know very clearly what aspects of your product UI need to be made available on each platform; then you must understand the limitations and advantages of each platform; [and] then, lastly, the UI needs to be thoughtfully adapted to feel native to that new environment," Schaedle says. Designers, for instance, must be willing to strip down their UI for a mobile device and let go of a button or feature that might not be entirely necessary. "In the case of Quore, we designed our UI for front desk associates stationed at a desktop screen much differently than maintenance workers in the field using mobile devices to document and report issues," Schaedle says.

Schaedle sees UI developers serving two masters: the boss or client who pays for the technology and the people who will ultimately use it. "Make sure that the buyer is able to get what they need from the software, but never at the expense of the people actually using it," Schaedle advises. "User testing with the people who will be using the software on a day-to-day basis is crucial to a successful product." Compromising the user experience ultimately undermines the business goals, he adds.

Schaedle notes that hotel general managers typically push employees to input as many details as possible about a specific situation into the management system. "But we know that the user is less likely to fill out forms with too many fields," he observes. Schaedle says that he and his team work hard to identify a UI's "must-have" and "nice-to-have" features in an effort to encourage ideal user behavior, incorporating smart default options wherever possible to reduce the number of decisions that a user has to make.

Recently, while creating a UI feature designed to increase hotel housekeeping efficiency, Quore developers began the project by identifying a housekeeper's most crucial tasks, and then built the UI design around those tasks. "The outcome of this exercise yielded a feature that increased adoption among users, increased the efficiency of the department, increased guest satisfaction by ensuring a room is ready upon check-in and saved money," Schaedle says.

Good UI designers are excellent listeners, Schaedle says. "They’re really more of an anthropologist than a designer," he adds. Schaedle notes that top UI designers work hard to understand the user and then draw upon their skills to solve specific problems. "A deep understanding of your customers and the users' industry will always lead to stronger designs, implementations and greater product adoption," Schaedle says.

Schaedle also feels that UI designers should think of themselves as the representatives of UI users as well as contributors to the overall design experience. "During handoffs of work, UI designers should work with developers to give them a clear understanding of their design intent and what the user will be accomplishing through the UI," he says.

When software developers have a new idea, they usually head straight to their computer. "I turn off my devices and break out the old-fashioned notebook so I can approach the design from a place of freeform creativity," Schaedle says. Schaedle believes that it’s only through this kind of low-fidelity iteration and exploration that a UI designer can discovers the best, most unexpected design solutions. "I prefer this method because when it comes to pleasing the consumer, the best design always wins," Schaedle states.