The container engine supplier wants to help usher containers from development into production via IT operations.

Docker is trying to get out of the spot development business and into managing containerized enterprise applications throughout their lifecycles. On Tuesday, Feb. 23, it released what it has dubbed Docker Datacenter, a platform for managing a container from its conception through production deployment.

Docker Datacenter can be viewed as both a pipeline through which a container may pass from inception to end of life in production, as well as a way to establish the container-as-a-service, an automated way to manage containers for maximum ease-of-use.

"Three years ago, as Docker was adopted by developers, IT operations managers started saying, 'Wow, how are we going to manage all these containers, keep them running, and offer SLAs?'" recalled Scott Johnston, Docker senior VP of product management. "We started a suite of tools that didn't slow developers down but allowed IT operations teams to manage containers." 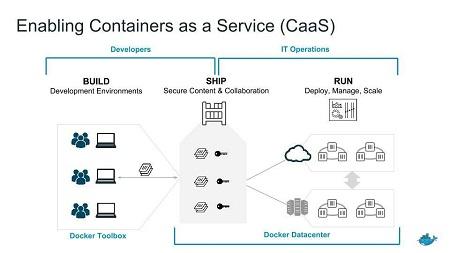 Docker Datacenter is the first release of that toolset, consisting of a Docker Universal Control Plane -- a set of tools for managing container life cycles in a new graphical user interface -- working with the existing Docker Trusted Registry. Trusted Registry is a product that stores containers securely and applies Active Directory or directory privileges to their use. Support for the Docker Engine, the formatting system that builds containers for applications, is built into the new Datacenter product.

One way Docker Datacenter is distinguished from the open source versions of Docker is that the open source version relies on the command line to run the platform. Datacenter gives the less programmatically oriented operations staff a simpler approach. Docker Datacenter has been in beta for the past six months, with 12 members of the Fortune 500 converting from early, unsupported adopters to paying customers as of Feb. 23, said Johnston in an interview.

Among those cited were payroll processing company ADP, which processes one out of every six pay stubs for workers in the US, and large Dutch bank ING. ING went from needing nine months to implement a major change in its infrastructure software "to needing only a matter of hours, a breakthrough change," Johnston claimed.

Docker Datacenter provides container-as-a-service for the enterprise data center by giving developers the ability to store their new applications in Trusted Registry, build new containers with Docker Engine, and move the containers to operations for deployment through Docker Swarm, its management software for placing containers on a cluster. Although these pieces have existed in the past, they can now function in a more automated fashion through the GUI and "tight integration" between them in Datacenter, Johnston said. 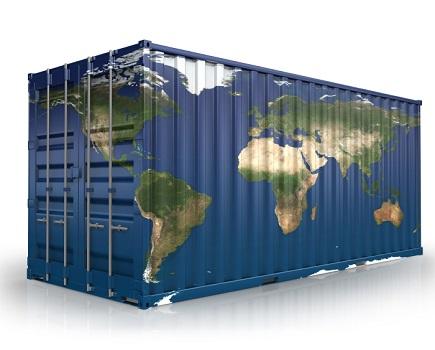 In a similar fashion, he said, developers can self-provision themselves with the containers they need and store them for movement into operations, without waiting for decisions or assistance for IT.

The breaking down of monolithic applications into sets of containerized services allows each service to be staged and tested before deployment without risking bringing down the whole application. Access control to the code can be provided for on-premises deployments, whether they're about to run on bare metal servers, in a virtual machine, or in a cloud deployment.

The management features work for workloads sent to Amazon Web Services or an OpenStack cloud, said Johnston. Docker will be supported in Windows Server 2016 later this year, opening the possibility of future support for Datacenter on the Azure cloud, he noted.

The Datacenter management characteristics that work for Fortune 500 members can also be effectively implemented by midsize and smaller companies as well. Johnston cited Healthdirect Australia and SA Home Loans as two examples of early implementers. SA Home Loans will use Datacenter to convert large, monolithic Microsoft .Net applications into microservices over the next few months. It is an example of a small shop using Datacenter. It plans to run it on a cluster of four nodes, he said.

Charles Babcock is an editor-at-large for InformationWeek and author of Management Strategies for the Cloud Revolution, a McGraw-Hill book. He is the former editor-in-chief of Digital News, former software editor of Computerworld and former technology editor of Interactive ... View Full Bio
We welcome your comments on this topic on our social media channels, or [contact us directly] with questions about the site.
Comment  |
Email This  |
Print  |
RSS
More Insights
Webcasts
How Elite Analyst Teams are Transforming Security with Cyber Reconnaissance
Strategies for Success with Digital Transformation
More Webcasts
White Papers
Centralized Security Policy Management Across Hybrid Cloud Environments Should be an Obvious Strategy
The Trouble with Phishing
More White Papers
Reports
2021 Top Enterprise IT Trends
How IT Security Organizations are Attacking the Cybersecurity Problem
More Reports

Docker Datacenter is a sign of a maturing container company with a view of operations as well as development.
Reply  |  Post Message  |  Messages List  |  Start a Board
Editors' Choice
Hot Topics