Evrythng offers open standard and engine that will help manufacturers label objects so that they can communicate with people and other objects.

10 Social Networks For Special Interests
(click image for larger view and for slideshow)
By now, you've probably have heard about the Internet Of Things, also known as IoT, a moniker the Internet earned when more objects than people became connected to the Web. A decade ago, there were 6.3 billion people living on the planet, and 500 million devices connected to the Internet, but by 2010, while global population was pushing 6.8 billion, the explosion of smartphones had boosted the number of Internet-connected devices to 12.5 billion.

Embedded processors helped us get to this point. In the late 1990s, the Web was still mostly a large library of linked text and images, but as embedded computers got smaller, cheaper and more powerful, they started appearing in household objects like car keys, alarm clocks and kids' toys -- as well as cars and even lamp posts.

The Internet became connected to more things than people on Tuesday, Aug. 10, 2010, as more machines than people signed up to new accounts with the two largest U.S. mobile network operators, Verizon and AT&T. By 2015, Cisco Systems estimates we will be awash with more than 25 billion Internet-connected devices, which will double to 50 billion by 2020, or 6.58 devices per person. This projected average is gobal; the per-person number will be much higher in developed countries.

[ Columnist Thomas Claburn sounds off on what IoT needs to succeed in The Internet Of Pointless, Perilous Things. ]

Cisco CEO John Chambers predicted that the IoT will enhance business revenues by "$14.4 trillion over the next decade."

The problem for CIOs anxiously watching the trend is that there has been very little practical work going on to commercialize it. That is because of the lack of a common standard, according to Andy Hobsbawm, founder and chief marketing officer of Anglo-Swiss startup Evrything.

"At the moment, the Internet of Things is a fragmented space, with little cohesion between actors," he said in an interview. "On one hand, we see companies building complete Internet-connected consumer electronics (smart TVs, radios, security cameras, heating systems, etc.). On the other hand, many companies sell generic building blocks that enable the IoT, from device manufacturers -- who build CPUs, radio chips, sensors, LCD displays, etc. -- to software providers [[who make]] analytics and control software, mobile applications to remotely control your house, etc.." 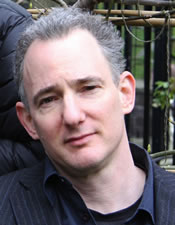 What the IoT movement needs, said Hobsbawm, is a "single, unique and common standard" to make possible the type of interoperability that would allow buying software from one manufacturer and having it "integrate seamlessly with the software provided by another manufacturer." The lack of a standard has been slowing down the progress of an open IoT as CIOs need to focus more on technical standards and protocols rather than what they can actually do once objects are connected, he said.

That's where Hobsbawm's company comes in. It's building an open standard for "things" to interact seamlessly with each other on the Web. If he and his team can pull it off, that would allow the product manufacturers to focus on the novel types of applications and services they can offer on top of Web-connected products, without worrying how their products get connected in the first place.

Once a standard has been established, companies will need new technologies to "digitally super-charge" existing physical objects, Hobsbawm told Information Week UK. "There's a lot of future gazing talk about how this could work tomorrow. But there are some fantastic examples of the Internet of Things at work today, like improving healthcare delivery by connecting medical machines," he said, adding that the device needed to communicate to all of the connected objects is already in our hands – the smartphone. "Your iPhone or Samsung Galaxy represents a critical bridging technology and interface to make products smart, while we wait for future connected things to find their way from factories to our living rooms."

As the cost of sensors, CPUs, storage and connectivity continues to decrease, implementing new IoT technologies into everyday objects is "inevitable," said Hobsbawm. To move the process along, he and his "Swiss rocket scientists" have built the Evrythng Engine, technology that provides "high scale, industrial technology to create and serve millions of intelligent Web identities for a company's products and other objects," said Hobsbawm. "Think of a Facebook for Things, where individual objects, just like people on social networks, have their own unique digital profiles that enable communications, apps and services." 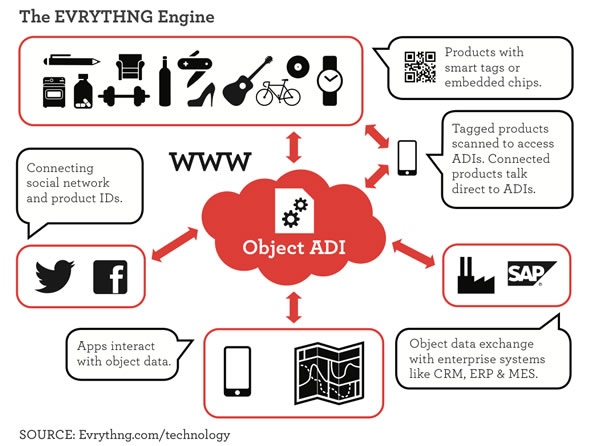 His vision goes beyond that, perhaps to places that might make conservative CIOs a tad uncomfortable. "Using a smartphone to engage with objects around you means that applications become less about big data -- which has perhaps been the cause of so many headaches for CIOs -- and more about networking lots of 'little data,' said Hobsbawm. "Exchanging small, ad hoc but potentially valuable pieces of information between users at the edges means there won't just be one cloud but millions, all transient and forming spontaneously."

This represents a "staggering large opportunity" for London-based Evrythng, says Hobsbawm. "We're tapping into a fast growing, global market space as manufacturers and brands make products 'smart' by connecting their physical assets to add enhanced digital services -- for direct customer engagement, enhanced product functionality, market differentiation, and smarter data analytics," he said. "Our mission is to make every physical thing in the world addressable and part of the Web."