Google+ Headaches: What You Need to Know - InformationWeek

BYTE’s Steve Krause tracked down Google+ pain points--so you can avoid headaches with the new social service.Google's latest--and many say greatest--attempt at social is the buzz of the summer. But the large-scale beta release of Google+ is not without issues.

I haven't been conducting a field test, exactly, but I've been using Google+ with vigor recently and tracking the glitches I found. Consider it a service, Google. You don't even have to pay me for this!

I’ve been trying hard to push the new social network to its limits. I haven’t succeeded in breaking it, but here’s a rundown of issues I’ve noticed. Some of them are already widely-reported, and others have flown below the radar.


BYTE also let Google take a look at the following list. The company's response to each of the issues is posted below as well.

Soon after the product's initial beta release on July 10th, Google+ chief Vic Gundotra came out to apologize for some of its funky behavior. Turns out Google let its servers run out of hard drive space. Really? Google manages all that mail and all those docs, but it ran out of space for Google+. Imagine.

I fully expected issues with this beta preview, but I never thought Google would get hit with something so basic. Letting servers run out of space is like letting a jet run out of fuel.

I appreciate the transparency of the Google+ team. But before it goes prime time, it should probably make sure it enables server monitoring. BYTE is in beta, too, and not everything here is working perfectly yet, either. We have plenty of disk space, though.

Google's response: A Google rep tells BYTE that this is just one of those technical snafus that comes with a field test.

To be fair, this was only a momentary blip in the brief life of Google+. It didn't affect the vast majority of users and was fixed immediately.

Then there's the issue of invitations. Google has been using an invite system to slow the stampede--same as it did with Gmail, Google Voice and Wave. When I received my Google+ invite, I was pretty excited. That excitement died quickly when I clicked on the link and learned Google was only kidding. The system was "temporarily over capacity." 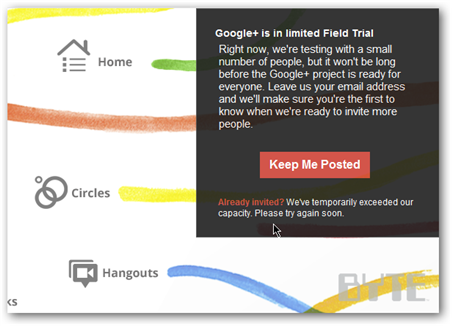 Receiving an invite for Gmail, Google Voice, and even Google Wave felt, to many folks, like getting a golden ticket for a candy factory. Google+ should've duplicated that experience. Instead, it left me feeling rejected. I had to wait days to get on. There's no workaround for this one other than just waiting a few days, which I did.

Google's response: Google reminds BYTE, and we agree, that this is par for the course in a field trial.

Why are no Google Apps customers allowed? Google requires that you create a free Google Account first (meaning Gmail). There might have been technical or strategic reasons why Google Apps accounts cannot be used with Google+. But the brief and cryptic error message Google+ sent me provided little insight. This left me confused and disappointed. I had to create a new Gmail account--the horror!--and use the invite link in that inbox. I was able to work through it, but Google needs to do a better job at making sure paying customers like me aren't left out. Here's the message I received:

Google's response: The company tells BYTE that when it came down to crunch time before the planned launch of Google+, not everything was ready to go, but they forged ahead under the field test banner anyhow. Google assures us that new features and support for Apps users and others are on the way.