0 comments
Comment Now
Tweet
To get users to discover the business value of enterprise social networking, first give them a fun experience, IBM says.

7 Examples: Put Gamification To Work
(click image for larger view and for slideshow)
By promoting its partnership with Bunchball for the gamification of IBM Connections, IBM is recognizing that enterprise social networking is not necessarily its own reward.

For a little more than a year, IBM and Bunchball have been selling an integrated solution that encourages adoption of the enterprise social network by making the initial learning and ongoing use of the platform more fun and engaging.

When an organization introduces an enterprise social network, jaded employees often see it as something of questionable value, just the latest passing management fad and something they can safely ignore, Rajat Paharia, founder and chief product officer of Bunchball, said in a presentation at the IBM Connect conference in Orlando. Social business enthusiasts may know in their bones that this is wrong-headed, but those people still need to be convinced. The best way to do that is with incentives for adopting the technology rather than penalties for failing to do so.

Prabu Ayyagari, a business development executive at IBM who works with Bunchball, agreed. "Being engaged is critical, and being engaged is what you want from your users," he said. "How do you get engaged users? Primarily by recruiting them [and] making it fun for them."

Ayyagari acknowledged that gamification initiatives often encounter resistance from corporate leaders who see work and play as incompatible. Yet it's worth pushing past that resistance, he said. "It's okay if the enemy underestimates us -- the enemy being the status quo."

Although gamification is more psychology than technology, Bunchball is one of several vendors of software platforms making it easier to incorporate into online experiences.

Gamification is one way to apply big data analytics to social media, enticing users to engage, measuring the response by tracking their every action, and bestowing rewards and recognition to drive yet more engagement.

Paharia enumerated 10 "game mechanics" tools for engagement -- fast feedback, transparency, goals, badges, leveling up, onboarding, competition, collaboration, community and points -- that work together to produce motivation to complete tasks, when they are presented as challenges for which achievement will be recognized and rewarded.

The first time you enter the FarmVille, Zynga's famously addictive Facebook game, you're greeted by a character who walks you through the process of planting and growing your first crop. This avoids the problem of being confronted by a blank screen (or an empty plot of land) and not knowing what to do. "In 5 minutes, you've learned how to play FarmVille by playing FarmVille; you've learned all the basics," Paharia said. "They've trained you without you knowing it was training."

The gamified introduction to IBM Connections is meant to work much the same way, with entry-level tutorials for basic tasks like creating a profile, adding a photo of yourself and starting to follow other users. Each of those first baby steps comes with immediate feedback to let you know you've done a good job, and once you've completed the most basic steps, you "level up" to slightly more sophisticated ones. 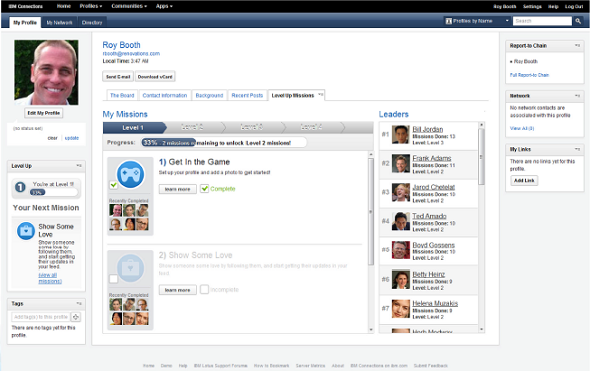 Bunchball's gamification guides users through tutorials on the use of IBM Connections.

"You can't do the level two missions unless you've done all the level one missions. At each stage, the site tells you exactly why this piece of functionality is valuable and why you should do it," Paharia said. This constant, positive feedback drives users to do more. Because this is a social application, it also lets you see which of your friends and contacts have gone through the same steps, which Paharia said "gives a sense of life and activity to the program." Also, users who get stuck on any step know exactly who to reach out to with a question because those people have already done it.

Gamification techniques bear some resemblance to rewards programs such as the airline programs that award free flights for miles flown or credit card programs that give cash back for purchases. Rewards programs "have been around forever," Paharia said, but the difference is they're keyed to strictly transactional data, whereas gamification is based on all sorts of activity. In general, the rewards bestowed through gamification programs need not be monetary -- in fact, it's often better if they are not.

"Giving dollar value rewards is the easiest thing to do, and also the least effective," Paharia said. Research on user behavior shows that people are more motivated by rewards that confer status than they are by money. According to Paharia, people also turn out to be more motivated by a chance to earn money for a favorite charity than to pocket it themselves, while teams are often best motivated by systems that allow members to bestow rewards on other members. "The idea of creating strong bonds within teams by letting them reward each other is very powerful."

We welcome your comments on this topic on our social media channels, or [contact us directly] with questions about the site.
Comment  |
Email This  |
Print  |
RSS
More Insights
Webcasts
Linking, Orchestrating, and Managing Your Enterprise Security Systems
Getting the Most from Threat Intelligence
More Webcasts
White Papers
NetFlow vs Packet Data
Definitive Guide to Securing DevOps
More White Papers
Reports
Can You Spare 10-12 Mins to Help Us Out with a Survey on Tech Trends?
Got 7 Minutes? Dark Reading Needs Your Help With Our Survey on Incident Response
More Reports
Copyright © 2020 UBM Electronics, A UBM company, All rights reserved. Privacy Policy | Terms of Service