Eric VanDelden discovered SmartRecruiters just in the nick of time.

The free social recruiting service came to his attention just as he was about to sign another expensive contract for enterprise recruiting software on behalf of EF Education First, where he serves as recruitment and development director. Based in Switzerland, EF consists of 17 businesses, all focused on international travel, education, or a combination of the two, including some well-known brands like Smithsonian Tours. EF is also affiliated with Hult International Business School, which has campuses in Boston, San Francisco, London, Dubai, and Shanghai. It was a colleague at Hult who persuaded VanDelden to stop and look at SmartRecruiters, which she had just discovered, before signing on the dotted line.

[ Hint: it's social. Read How Facebook Manages Its Workforce. ]

Initially, he was skeptical that SmartRecruiters could be as good, especially given that it was free (SmartRecruiters makes its money off distribution fees from job sites like Monster). But that enterprise software contract was never signed. Now, VanDelden is promoting SmartRecruiters as the preferred solution within the company.

"Originally, because of my skepticism, the idea was to try it for a month. Then it was to try it for three more months and see where we are. Now we're saying, let's get those other businesses that are paying for all those bells and whistles to switch," VanDelden said. EF has about 40,000 people on staff; about 30,000 are permanent and the rest are seasonal employees such as teachers who work for EF over a summer break. That means the organization is always hiring.

SmartRecruiters CEO Jerome Ternynck said his service was originally marketed to smaller businesses that couldn't afford an enterprise recruiting software product, but he is starting to see it attract some larger businesses. Another example is Bristol-Myers Squibb, the global pharmaceutical and biotech company, which is rolling out SmartRecruiters in 20 countries. Bristol-Myers is a longtime customer of Taleo in the U.S., and that hasn't changed, but it is adopting SmartRecruiters as a simpler solution for use in other countries, Ternynck said.

Recruiting and talent management software is a hot category, adjacent to social software because of its emphasis on the personal profile, which was a factor in IBM's recent acquisition of Kenexa and Oracle's purchase of Taleo.

SmartRecruiters wouldn't necessarily win a feature-by-feature bake-off against those products, Ternynck said, because it emphasizes collaboration to the exclusion of traditional applicant tracking features.

"Collaboration is a more effective way to get things done," Ternynck said. Recruiting works best as a conversation, where insiders talk with candidates and figure out who else they should talk to within the organization to determine fit for a job. In the SmartRecruiters application, those interactions are handled through a social feed called HireLoop. "There's no automation; it's really pure collaboration," Ternynck said. 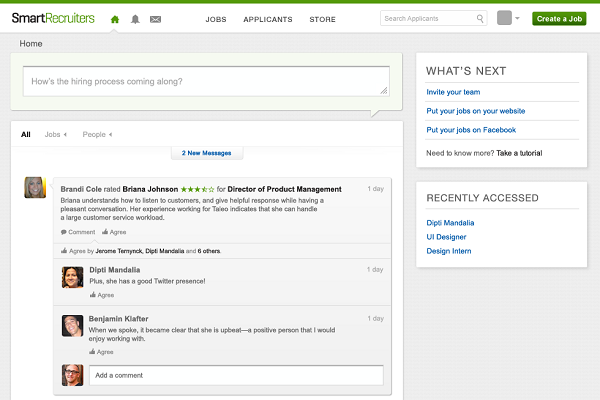 SmartRecruiters also provides applicants with 1-Click Apply option, where they can send an employer a snapshot of one of their social profiles rather than an application and resume.

At EF, the transition to SmartRecruiters won't happen overnight because EF is a decentralized organization that currently uses four different recruiting software products. (The company pays for the other three, according to VanDelden.) While he does not plan to mandate the switch, he said EF's businesses are proving willing to consider SmartRecruiters, even though many have made significant investments in other solutions. "The reality on the ground is more compelling," he said. "I've been involved in a lot of software rollouts, trying to convince people to change their processes or change their behaviors, and I've never seen anything like this."

The social collaboration built into SmartRecruiters is particularly useful for the hiring process at EF, where colleagues in different offices around Europe might be collaborating to fill a position, and it's helpful to have a news feed-style record showing the progress of that process, VanDelden said. "We hire in the way that SmartRecruiters was designed, but when we started looking around for software, most of it was designed with a traditional mentality--very pipeline-oriented." VanDelden acknowledged that organizations used to working that way might have trouble adapting to SmartRecruiters, but for EF, it's been a great fit. "Fortunately for us, we already had that mindset."

We welcome your comments on this topic on our social media channels, or [contact us directly] with questions about the site.
Comment  |
Email This  |
Print  |
RSS
More Insights
Webcasts
Quantifying the Benefits of a DevOps Strategy
Effective Cyber Risk Assessment and Measurement
More Webcasts
White Papers
2020 Gartner Market Guide for Network Detection & Response
How You Can Evaluate Your Org's Cybersecurity Readiness
More White Papers
Reports
DNS Network Traffic Volumes During the 2020 Pandemic
The State of IT Operations and Cybersecurity Operations 2020
More Reports

Can something like SmartRecruiters be used as a social front end to more traditional recruitment platforms?