50%
Tweet
How do we make corporations more like cities, which get more productive as they grow bigger? Help me with my ongoing research project.

Burn this term into your head: superlinear corporation. Burn the graph below into your head too. You will likely see graphs like this one, based on real data from individual companies, in the next two to three years.

Corporations that adopt social business practices successfully will be able to produce and brag about graphs that look like the upward-arcing one labeled superlinear. I hope to help make this happen. 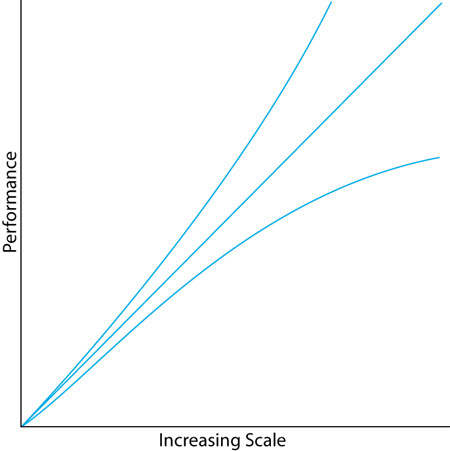 The terms superlinear and sublinear were first used by Santa Fe Institute biologist Geoffrey West to describe processes and systems that get more efficient with scale and less efficient with scale, respectively. West originally studied these phenomena in biological systems and has recently turned his attention to human social systems.

One of his most interesting findings is this: Cities are superlinear; corporations are sublinear. What this means is that cities, as they grow bigger, get more productive, creative, energy-efficient, and generally better by just about every interesting metric. Corporations, on the other hand, get less productive, less creative, more wasteful, and generally worse in every way.

Makes intuitive sense, doesn't it? Creative, energetic young people want to live in big cities, but they want to work in small companies.

On the macro-scale, this means that cities are effectively immortal, while corporations (like humans) are mortal. In fact, not only are corporations mortal, but their lifespan has been falling rapidly. How rapidly? John Hagel pointed me to research by Dick Foster in his book Creative Destruction, showing that the average lifespan of companies in the S&P 500, which was 75 years back in 1937, had fallen to 15 years by the early 2000s.

While the results from West and Foster are empirical, we can speculate about the causes of these phenomena.

My theory is straightforward: Cities are open; corporations are closed. People can move into and out of cities freely and basically do whatever they want so long as they can pay the cost of living. So people naturally leave cities that don't work for them and flood into cities that do. This makes cities self-renewing and self-organizing.

The basic relationship between openness and vitality is clear. Cities are their own fountains of youth. By contrast, corporations and humans are closed systems. After a peak, they generally get less creative and slow down as they age, and eventually die. Cities do die, but it's astonishingly hard to kill them. They seem resilient to everything from plagues to nuclear bombs.

Shortening company lifecycles is harder to explain, but my theory is that it has to do with the interplay of two phenomena: shortening product lifecycles and an inability to handle disruptive innovation.

Shortening product lifecycles are a direct consequence of a growth-centric economy where the pressure to create shareholder wealth forces companies to compete in an arms race of planned obsolescence, constant novelty, and the increasingly aggressive pursuit of customers' limited attention.

In this environment, if a corporation can't become more than its best-selling product, it faces a mortal threat every time a major product reaches end of life. If it can't replace a vanishing market just in time with a market that's growing exactly as fast as the old one is vanishing, it's in deep trouble.

And generally, corporations do end up in trouble and die. The dynamics of disruption, by which smaller, lower-cost players on the margins topple incumbents, ensures that this happens. As a result, corporations start dying with their major products. Product line end-of-life often spells corporate end-of-life.

Is there a way out? Actually, there are two, and both are based on social business software.

The Fruit Fly And The Rainforest

The shortening lifecycle is the more fundamental of the two phenomena we've discussed (the other being the sublinear nature of traditional corporations). Your solution depends on whether you want to accept and run with it, or fight it.

Great connection--thank you! It really is fascinating when you apply some of these theories to existing companies, and think about how enterprise 2.0 or "social" are furthering and sometimes changing the (excuse the expression) paradigms.

you may already be familiar with it, but in the organizational sciences there's a theory of organizational ecology that's somewhat analogous to your rainforest analogy. here's the wikipedia link to the general idea behind it: http://en.wikipedia.org/wiki/O...
Reply  |  Post Message  |  Messages List  |  Start a Board
Editors' Choice
Hot Topics