I've been testing Google Now for a few weeks on a Samsung Galaxy Nexus smartphone and the Google Nexus 7 tablet. Search innovation is alive and well.

Armed with your mobile phone you are now a mobile sensor, careening along your footpath, reading your email, consuming your information, enriching your journey with timely recommendations as you dodge passersby. Tap. Swipe. Pinch. Zoom. Learn of the world.

And the world quietly learns about you, at least as organized by Google.

Don't be frightened. Soon you won't be wondering what else you can do with your phone, you'll be amazed by what it does for you.

At least that's the promise of GoogleNow.

Google Now is more of a mobile experience than an application, more of a search service than a search action. It could well redefine mobile search.

Certainly its name betrays its ambition.

But we're getting ahead of ourselves. For starters, Google Now is still learning. It gets some things right, and some things oddly wrong. In that sense, it's more like Google Soon than Google Now.

I've been testing Google Now for a few weeks on a Samsung Galaxy Nexus smartphone and the Google Nexus 7 tablet. Google Now is part of Jelly Bean, the newest version of Google's mobile Android operating system.

It’s powered by Google's Knowledge Graph, unveiled a few months ago. As Google puts it, the Knowledge Graph creates connections between objects (entities) based on observed relationships and patterns--observed, that is, through Google Search.

(Fast Company offers up some insight into Google Knowledge Graph, while Mashable has some excellent insights into how Knowledge Graph could change the future of search.) 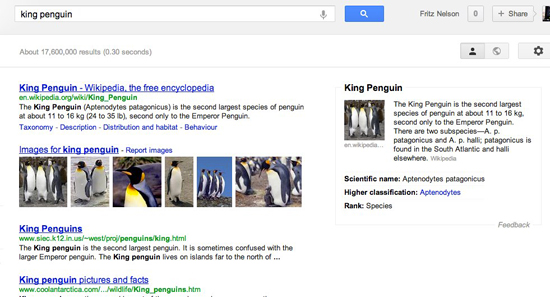 Today, for instance, when you search for penguins, Google presents a panel on the right-hand side of the search page showing the Pittsburgh-based hockey team or the animal. A subtle but important shift, Google would say, from being an information engine to becoming a knowledge engine. What's more, the search for "king penguin" provides rich information, including its scientific name, species and so on. The Knowledge Graph attempts to provide the information it thinks you'll want.

There are three (and a half) ways to access Google Now directly: from the search bar on the Android home screen, from the Google app, and by swiping up from the bottom of the home screen (a bit redundant, frankly). Alerts driven from Google Now can also show up in the Android notifications (this is the half).

The Google Now interface provides a series of "cards," all driven by what Google learns about you, which is to say what you allow Google to learn about you--it's entirely an opt-in experience.

What this means is that your location, your searches, your travel habits (by car, using Google Maps and location services; by air, using your searches for flight status; by public transit using location) and your calendar data all get filtered, processed, and eventually understood (your context) and mapped to pieces of information Google might know (the content).

For example, Google Now follows your searches for restaurants, and as you drive about, it will pop up suggestions based on time of day (like dinner time). It learns your favorite sports teams, and creates cards that follow the action in real time. It knows the flights you've searched and provides flight status automatically. There are cards for currency (when it knows you're in a different country) and language translation.

Much of this capability relies on search, and while it can comb through your searches in the native Android browser, it can also use Google's Chrome. And because Chrome essentially maintains your search session state across devices, something you've searched for with Chrome on the desktop (or on an iPad) gets fed into Google Now on the mobile device. You have to be signed into your Google account for all of this to work, naturally.

Despite my near constant use of the Galaxy Nexus phone, Google Now still has plenty to learn about me. It knows that I am a Dodgers fan, because I looked up scores for a couple of days. Now I've got a permanent Dodger card in Google Now and it provides me with real-time scores of games (it's been depressingly inconsistent lately).

It does well providing local weather reports, even as I move around. It provides a decent reminder of my appointments, but I've got a Google Calendar widget that does a more thorough job. However, when I enter in an address for an appointment, it does alert me in an interesting way: It tells me, based on distance and traffic data, what time I need to leave my current location in order to make my appointment on time. In some ways, I actually wish this notification was more intrusive (or that I had the option to make it so, especially for the most important appointments). But this is a layer of data that is really valuable. It starts to scratch at Google Now's promise.

Fortunately, I travel very little during the summer, so I haven't been able to take advantage of any flight information or mass transit cards. And I’ve spent a few weeks working away from the office, so Google Now was initially confused about my more permanent locations (work and home). By default, Google Now views the time you spend during the weekday to be "work" and the time you spend in the evening to be "home." Luckily, you can go into your location settings and force Google Now toward the truth.

Location-based searches worked sporadically. Once, I did a few searches on both Chinese and Asian restaurants, an hour or so before heading out on some errands that would end around dinner time. And then, because I knew I'd be driving by one Asian restaurant in particular (Pei Wei), I searched for it in my browser. During my errands, Google Now presented several Chinese restaurants, all about 15 miles away from where I was (the results were closer to my home), even though there was a preponderance of such restaurants nearby. Indeed, despite my specific Pei Wei search, a notification failed to materialize, even as I drove right by.

The Future Of Search

For now, it seems a novelty, an enhancement to notifications, an accompaniment to outdo Apple's Siri.

But the more searches you conduct, the more places you go, the more you use your phone, the smarter Google Now gets. Over time, it will feed ever more useful data, so the promise goes.

One reaction people have to opting into Google Now is that it is, truly, watching you. Even though Google Now is a completely opt-in service (it contained no data until I gave it permission), doubters questions what Google will do with all of this data. Will employers ask for controls to tap into the data? How about legal authorities?

It's becoming clearer that Apple, Microsoft, and Google want to engineer their ecosystems so that customers get the most value by choosing only one of them--for the operating systems, browsers, applications, cloud and hardware. There's an end-user advantage, to be sure: the promise of a seamless user experience across devices (laptop, tablet, phone), and the movement of data among those devices using each company's notion of a personal cloud (Google Drive, Microsoft Skydrive, Apple iCloud). But the disadvantages abound: less freedom of choice, dependence on your chosen ecosystem for innovation at a time of dynamic and exciting change. What just became state-of-the-art from Google in June will quickly be surpassed by Apple in October.

There's plenty to be said for choosing Google. While it's completely absent on the desktop (unless you really want to count Chrome and the Chrome OS), it has been a fast innovator. In its latest incarnation, Google Now provides meaningful voice-based search. Not just a spoken word search, but, like Apple's Siri, the ability to request facts (the height of the Empire State Building), rather than just a search results page. Google Now can call a contact, provide directions, and answer your most pressing questions (although when I asked for the nearest hospital, however, it gave me a veterinary hospital; long story short, I lived), providing much of this information back by voice response.

Google Now gets incredibly interesting when you consider the possibility of third-party developer access. It’s great to get flight information from the Web, but it's far more interesting if my flight apps tie into Google Now. What about my banking apps? It would be nice if those could feed Google Now to remind me about bills I need to pay, possible unauthorized transactions, or even let me make mobile payments.

If I want to work at my nearby Peet's Coffee shop every morning, why can't Peet's write an application that knows, using Google Now, that I'm heading that way, that I'm leaving now, that it will take 10 minutes, that I usually enjoy a medium Cafe Au Lait, and that I need a Wi-Fi code ... as I close in on Peet's my order appears to a barista, who makes it and I'm handed the drink and Wi-Fi access as I enter. Or maybe half way there, Peet's alerts me to a special deal on fresh-brewed Kona Coffee in a french press machine, letting me change my order on the fly.

On the other hand, we don't know what Apple has up its sleeve. Rumors persist that Siri will pervade everything from the remote control to your Apple TV experience. Already, Apple will likely surpass Google Wallet with the Passport service in iOS 6, so it, too, is thinking about how it can automate applications into a more nimble, convenient user experience. (Microsoft Windows Phone 8 will include a Wallet Hub, with similar designs.)

But until then, there’s Google Now. While some have said that Google has lost its way from its search heritage, pointing to its obsession with Google Plus, Google Now offers plenty of evidence that its search innovation is alive and well.

We welcome your comments on this topic on our social media channels, or [contact us directly] with questions about the site.
Comment  |
Email This  |
Print  |
RSS
More Insights
Webcasts
Zero Trust for a Work-From Home World
People Are The Most Important Part of Autonomous SOC
More Webcasts
White Papers
Are We Cyber-Resilient? The Key Question Every Organization Must Answer
Understanding Credential Abuse Attacks: A Real-World Example
More White Papers
Reports
Building the SOC of the Future
How Data Breaches Affect the Enterprise (2020)
More Reports
Copyright © 2021 UBM Electronics, A UBM company, All rights reserved. Privacy Policy | Terms of Service