But sources, targets, and transformations should be considered fairly routine in an ETL tool. They are, ultimately, the tool's raison d'etre. To stand out from the crowd, any ETL tool must go beyond the routine. There are several factors that make Informatica PC7 a strong product, beginning with the PowerCenter architecture.

The PowerCenter architecture comprises three main components. (See Figure 1). The Repository is the collection of all PC7 objects (sources, targets, transformations, mappings, workflows, and so on) and is housed in a standard relational database. The Repository Server is the server application that manages the repository database. Finally, the Informatica Server is the server application that runs the workflows and the mappings. PowerCenter Web services are managed through the Web Services Hub, another component of the architecture, which supports standards such as Simple Object Access Protocol (SOAP), Web Services Description Language (WSDL), and Universal Description, Discovery, and Integration (UDDI). The architectural components can be collocated on a single server or spread across diverse servers, which allows solution parallelism, flexibility, and scalability. 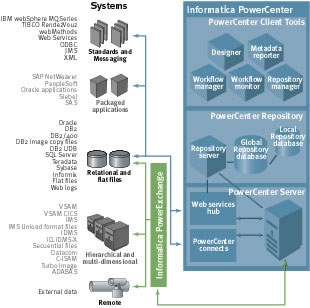 PC7 offers server grid capabilities, too, by which PowerCenter can distribute loads across heterogeneous Unix, Windows, or Linux-based computing platforms. Although grid capabilities may seem exciting, I don't believe they match real-world need for grid computing yet, and I wouldn't recommend using them in place of other industry grid solutions.

Curiously, some deficiencies are common among many ETL tools, and PC7 is no exception. In particular, the lack of global variables within a mapping (not quite addressed by PC7 mapping variables) and of ways to effectively document mappings is not just annoying — it's a genuine shortcoming that limits the effectiveness of the ETL tool. Also, be aware that ETL tools are in general a slower (if more elegant) alternative to native SQL processing (such as Oracle PL*SQL or Microsoft Transact SQL).

A research survey from Forrester reports that spending for data warehousing is expected to rise. Growing volumes of data, shrinking tolerance for data latency, growing data complexity, and mandated privacy initiatives and security concerns are leading business drivers for data warehousing and ETL solutions in 2004. In today's rapidly changing market space, where disappointingly common vendor approaches in ETL technology are leading toward solution commoditization, survival will depend upon factors such as product differentiation, reading the customer's mind, and time to market. Informatica PowerCenter 7.0 is no different in concept from many of its competitive products, yet (with forays into grid computing and integrated profiling and cleansing, and its open architectural approach) it appears well positioned to keep pace with — if not rise above — the competition.

As a product, PowerCenter 7.0 offers a compelling alternative in the ETL space. But more often than not, ETL is seen to be a process with a mission, tied to data warehousing, business intelligence, or both. And the feature-rich, tightly bound, and architecturally open combination of PC7 and PowerAnalyzer has the potential to lead the ETL-plus-BI solution space, against close competition from the likes of Ascential and SAS. But the race isn't over yet, and any front-runner would do well to heed the plight of Smarty Jones in the Belmont Stakes.

Rajan Chandras is a principal consultant with the New York offices of CSC Consulting. The opinions expressed here are his own.