Prior to adding a social element, the Children's Hospital of Philadelphia already had a collaboration system in place in SharePoint. The only problem: few people knew about it.

Meanwhile, email was a much more inefficient way of doing group collaboration, but it was the tool everybody knew about and knew how to use. That's the basic thing the hospital decided to change by implementing the combination of NewsGator and SharePoint.

Yes, this is one last NewsGator story. True, the deficiencies the hospital saw in SharePoint dated back to its SharePoint 2007 implementation, and the SharePoint 2013 edition includes more out-of-the-box social functionality.

Yet selecting NewsGator as a layer on top of SharePoint proved to be a good decision, said Kirsten Culbertson, interactive intranet producer at the hospital and leader of the project. "NewsGator has faster cycles -- they're improving every three months -- whereas it takes I don't know how many years before SharePoint provides a new version. NewsGator also comes with more tools than SharePoint [alone] can offer us right now," she said.

After implementing NewsGator atop SharePoint 2010 last year, the hospital is in the process of upgrading to SharePoint 2013 and the latest version of NewsGator, she said.

"What we're finding is younger employees are getting in there right away, and within a day they'll have 400 connections," Culbertson said. "For the rest of us, it's going to take additional encouragement." That means end-user training, as well as discussions with the management and directors of the hospital about the significance of social collaboration. "A lot of the work we've been doing is kind of political in nature," she added. 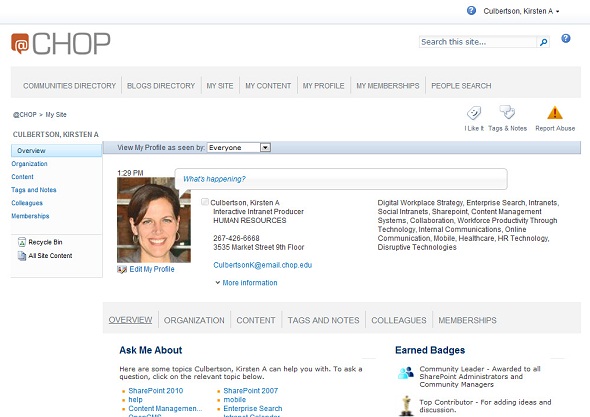 Examples of successful uses include:

One of the drawbacks of the way SharePoint was used in the past was that collaboration was limited to tight-knit teams and "did not allow for users to see what any other groups were doing," Culbertson said. At the same time, SharePoint previously had been approved for applications including those involving storing sensitive patient data -- which made sense as long as those collaboration sites were isolated. That all needs to be rethought in the social environment, she said, although she believes it ultimately should be possible to manage patient health information through more tightly secured communities on the platform.

Culbertson works in internal communications, although she has also been working with other departments such as human resources on initiatives such as using the social network as part of employee training. Employee profiles are being enriched with data pulled from a Lawson human resources information system and a likely next step will be integrating with a performance management system.

The goal is to "create a clear picture of each employee and their skill set and what their accomplishments are," Culbertson said. "What we're doing right now is a lot bigger than just improving communications across the organization."