SEARCH
A minimum of 3 characters are required to be typed in the search bar in order to perform a search.
Announcements
Report
Find out what you need to know so that you can plan your next career steps and maximize your salary.
Event
Explore strategies, new technologies, and best practices to provide a secure infrastructure - Learn more at Interop!
PreviousNext
Government
Slideshow

LinkedIn is not just another social network like Twitter where anything goes. Avoid these "don'ts" and avoid becoming a LinkedIn pariah.
Debra Donston-Miller
Contributor
February 21, 2013 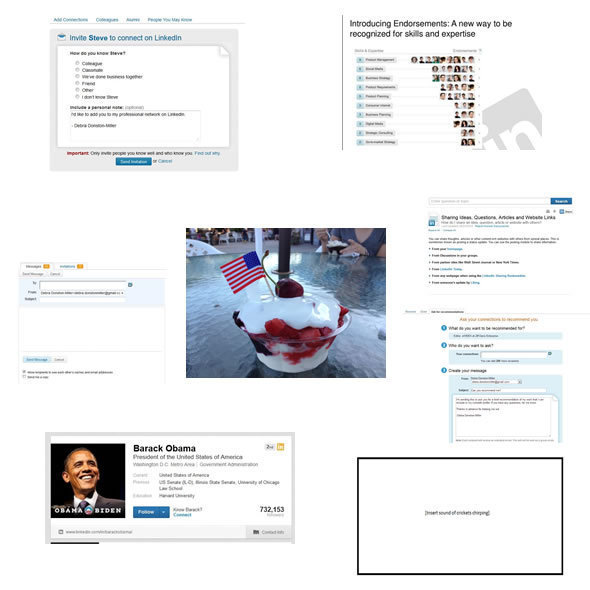 If you want to network professionally today, you have to be on LinkedIn. And, just as in face-to-face interactions, there are some specific no-no's when it comes to communication and collaboration on LinkedIn.

LinkedIn hangs its hat on being the most businesslike of the major public social networks, and many people who would never dream of liking something on Facebook or tweeting status updates on Twitter will participate on LinkedIn. Many people, on the other hand, are pros at using social networks and might think of LinkedIn as just one more. That would be a mistake. One of the biggest missteps people make on LinkedIn is treating it like any other social network. Think of it like flip-flops: Would you wear them to a job interview? Probably not. Likewise, you shouldn't do the virtual equivalent of kicking off your shoes on LinkedIn.

Another way in which people sometimes falter on LinkedIn is by taking advantage of their connections. Yes, it's really cool that you are directly connected to the CEO of your company, but that doesn't necessarily mean that you should direct message her on the network. And just because you have, say, 500 connections, it doesn't mean that you should be sending out 500 requests for recommendations. As in real-life business situations, discretion, judiciousness and courtesy should guide your interactions on LinkedIn.

LinkedIn has been making many changes to its interface lately, and some of the features have been met with more enthusiasm than others. Endorsements have been a particularly prickly subject, with many people believing they are meaningless or manipulative. It's important to keep abreast of changes to LinkedIn's platform, and to develop an understanding of how new features are being used and perhaps even abused. You don't want to be the one in breach of some unwritten rule. Two other mistakes people tend to make on LinkedIn are to do too much or to do nothing at all.

In trying to get into the spirit of using LinkedIn, it can be easy to go overboard updating your status, requesting connections and joining groups. But watch out. These activities can be perceived as spamming your connections.

Doing nothing, on the other hand, can be even more problematic because it renders you almost invisible and negates the very purpose of being on LinkedIn. LinkedIn is one of the most powerful networking tools out there, and it grows in power as more people see it as the de facto professional social network. Doing nothing can be the worst LinkedIn no-no of all.

Dig into our slideshow to get a grip on LinkedIn manners.