Amazon's billionaire CEO Jeff Bezos announced an ambitious plan to enter the private space race this week, joining other moguls such as Tesla and Space Exploration Technologies Corporation (SpaceX) CEO Elon Musk and the brash Virgin airline head Richard Branson in a reach for the skies.

Bezos and his team plan to build a rocket manufacturing plant and launch site in Florida under the auspices of Blue Origin, which will launch south of NASA's spaceport at Cape Canaveral in Florida.

"As a kid, I was inspired by the giant Saturn V missions that roared to life from these shores," Bezos wrote in a Sept. 15 blog post on Blue Origin's website. "Now we are thrilled to be coming to the Sunshine State for a new era of exploration."

The launch site at Complex 36, which in more than 43 years in operation has seen 145 launches thunder into space, will anchor the company's home on the so-called Space Coast. 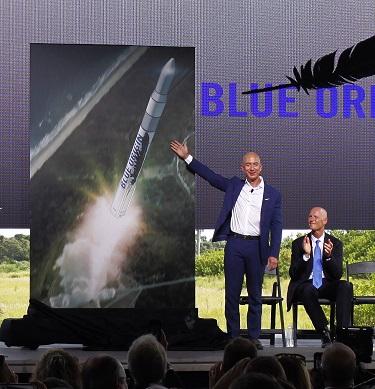 Aside from being constructed at the site, the American-made BE-4 engine, which will power the orbital launch vehicle, will be acceptance-tested there, and will eventually power the first flight of United Launch Alliance's Vulcan rocket.

"At Exploration Park, we'll have a 21st century production facility where we'll focus on manufacturing our reusable fleet of orbital launchers and readying them for flight again and again," Bezos wrote. "Locating vehicle assembly near our launch site eases the challenge of processing and transporting really big rockets."

The Complex 36 site saw its last launch in 2005, and the pad has stood silent for more than 10 years, a state Bezos boasts he intends to fix. However, his blog post notes the launch won't come until later in the decade, barring any setbacks or snafus, of course.

In the meantime, Blue Origin's website page for career opportunities is stuffed with listings, mostly based in Kent, Wash., including openings for propulsion design engineers, flight sciences analysts, and the intriguingly-titled robotic laser operator.

"Residents of the Space Coast have enjoyed front-row seats to the future for nearly 60 years," Bezos wrote. "Our team's passion for pioneering is the perfect fit for a community dedicated to forging new frontiers. Keep watching."

All three are looking to fill -- at least in part -- a gap left by NASA after the space agency's mothballing of the Space Shuttle program, which launched its last mission in 2011.

Nathan Eddy is a freelance writer for InformationWeek. He has written for Popular Mechanics, Sales & Marketing Management Magazine, FierceMarkets, and CRN, among others. In 2012 he made his first documentary film, The Absent Column. He currently lives in Berlin. View Full Bio
We welcome your comments on this topic on our social media channels, or [contact us directly] with questions about the site.
Comment  |
Email This  |
Print  |
RSS
More Insights
Webcasts
Emerging Security Threats Your Enterprise Should Be Aware Of
Protecting Mobile Apps and APIs from the Inside Out
More Webcasts
White Papers
Getting The Right Cloud Management
Economies of Database Scale Achieved
More White Papers
Reports
The State of IT Operations and Cybersecurity Operations 2020
Making the Financial Case for Outsourcing Endpoint Protection
More Reports

I totally believe that private industry can leverage space technology much more cheaply than governments can. This is simply the evolution of the space race – billionaires see the opportunity here, and have the cash to make it a reality. Why wouldn't they build lasting space businesses?
Reply  |  Post Message  |  Messages List  |  Start a Board
Editors' Choice
Hot Topics