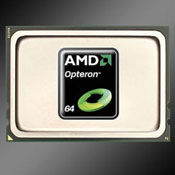 In launching the latest processors, which are built using a 45-nanometer fabrication process, AMD is hoping to lure customers from Intel with chips that support more memory and carry a lower price tag. In quantities of 1,000 units, the eight-core processors range from $266 to $744, while the 12-core chips range from $744 to $1,386. AMD launched five eight-core and five 12-core chips, all listed as 6100 series products.

Intel this month introduced its first six-core server processors. The Xeon 5600 series of processors range from $996 to $1,663 in quantities of 1,000.

In releasing the products, AMD is touting performance increases up to two times the level of its previous generation six-core processors, including an 88% rise in integer performance and a 119% increase in floating point performance. In addition, the chips' four channels of DDR3 memory offer up to a 2.5x improvement in overall memory bandwidth, according to AMD.

AMD plans to keep the pressure on Intel in the second quarter of this year with the release of the Opteron 4000 series, codenamed Lisbon. The 45-nm, four- and six-core processors are aimed at one- and two-socket servers and will run on a new DDR3-designed platform, codenamed San Marino.

In 2011, AMD plans another major produce refresh. Magny-Cours processors will be succeeded by 32-nm 12- and 16-core Opteron 6000 series chips, codenamed Interlagos. Lisbon will be succeeded that same year by 32-nm six- and eight-core 4000 series processors, codenamed Valencia. Interlagos will run on the Maranello platform and Valencia on San Marino.

By releasing more cores in each major product refresh, AMD and Intel are making it possible for companies to consolidate more applications on a single server through virtualization. Such a strategy is attractive to customers because it enables them to reduce the number of servers in a data center, while also reducing energy costs.

Other computer makers planning to ship servers powered by the latest AMD chips include Hewlett-Packard, Dell, Cray and SGI.