The update includes the fixes in the v10.6.4 update released June 15, plus a few compatibility and performance-related graphics issues specific to the latest iMacs.
Antone Gonsalves
Contributor
July 28, 2010 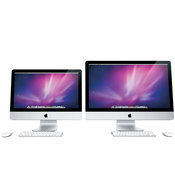 On the same day it refreshed the iMac line, Apple released a Mac OS X update for the latest models of the all-in-one desktop. The Mac OS X v10.6.4 Update iMac (Mid 2010) contains all the fixes in the original v10.6.4 update released June 15, plus a few specific to the latest iMacs.

The latter device is a wireless navigation device similar to the metal and glass trackpad found on MacBook and MacBook Pro laptops. The Magic Trackpad supports the same multi-touch gestures, including pinch to zoom in and out and swiping to flip through web pages or phones. The trackpad works with all the iMacs and costs and additional $69.

Apple also released on Tuesday Update 1.0 for the new trackpad. The update adds support for Mac OS X 10.6.4, and is required for using the device with the new iMacs.

In addition, the update enables inertial scrolling and the three-finger drag gesture found in the latest MacBook and MacBook Pro laptops.

The original Mac OS X v10.6.4 Update include a variety of fixes related to software and peripheral hardware, as well as plugging a number of security holes.

The latest iMacs come in the same two sizes as the older models, but the latter's Intel Core 2 Duo processors have been replaced with the chipmaker's more advanced Core i3, i5 and i7 processors. In addition, the systems are available with better discrete ATI Radeon HD graphics processors and a SD slot that supports the SDXC format to handle high-capacity storage cards.