10 Social Business Leaders for 2013
(read about them all)
Decisions are the lifeblood of a business, but we could probably all do a better job of making them and keeping track of why we made them.

Atlassian says its new Decisions Blueprint introduced as part of the latest update of its wiki, Confluence, can help. The new tool is included automatically with on-demand versions and available for download for the on-premises version.

Like previous blueprints -- templates that help with common tasks such as note taking, product requirements gathering and file management -- the Decisions Blueprint builds on the strengths of the Confluence rich text editor while providing more guidance on how to use it productively.

[ Do you have the necessary social business skills? Read Social Business Skills In High Demand.]

When users were introduced to previous versions of Confluence, "we would present them with a blank page, which often confused users because it didn't immediately signal to users how the tool could provide value to them," said Hodges. Confluence Blueprints are "more than just templates," including structured prompts to help the creator of a decision-making document tag the other participants and direct them to contribute in specific ways, within a given timeframe. When a decision is made, all participants are notified. The document then remains available for later reference so everyone can see what decision was made and why.

Confluence is primarily a wiki, a self-service environment employees can use to create, edit, and organize Web-based documents. Although Atlassian has been adding other social software features, Confluence doesn't have quite the market presence of Jive or Yammer. On the other hand, it's not uncommon for Confluence to be used side-by-side with other tools, particularly for software documentation and project planning. Atlassian also makes JIRA, which is popular software for bug and issue tracking.

Jive Software, which recently updated the cloud version of its social software platform to address the proliferation of social streams for business collaboration, offers a somewhat similar tool for marking the topics of conversations as requiring a decision or action as a way of structuring online workplace interactions. 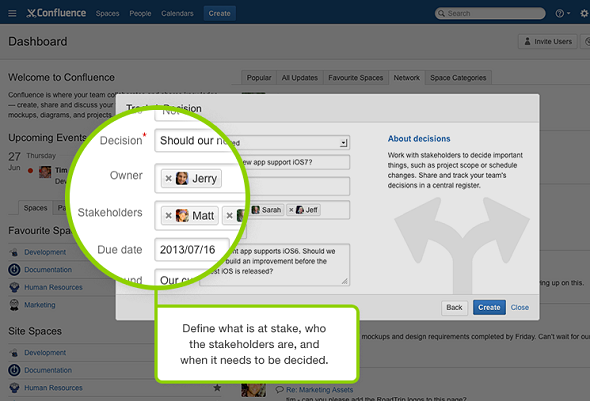 Hodges said one difference between Confluence and other social software products is its emphasis on hierarchy, which in this case means a decision "never gets lost in the stream" as it might in more free-form social collaboration networks.

Like the other blueprints in the series, the decision-making one was created as a result of studying how the most successful users of Confluence use the product and trying to help others rise to that level, Hodges said. The blueprints also guide users through using some of the platform's most advanced features, such as file management and version tracking for attached files. Those were things power users took advantage of, but many other users didn't know existed, Hodges said.

Atlassian's developers and product teams also looked at how they use the product in their own decision-making process.

For example, Hodges said he is only peripherally involved in decisions related to JIRA but can keep tab on them through the online environment. He was, for instance, able to refer to it to understand some recent decisions about renaming certain JIRA features, which has all sorts of repercussions for marketing and customer support. "I can use this to understand why the decision was made instead of having to set up a meeting or tap someone on the shoulder," he said.

Follow David F. Carr on Twitter @davidfcarr or Google+. His book Social Collaboration For Dummies is scheduled for release in November.