NASA is tracking a 3,600-foot long asteroid that is going to zip past Earth on Christmas Eve at a distance of 6.8 million miles. That's far enough that Santa's sleigh should be safe.

The day for unwrapping all your loot is still officially Friday, but stargazers are getting a long-distance peek at an early Christmas present tonight as the asteroid 2003 SD220 will safely fly past Earth this evening at a distance of 6.8 million miles.

Scientists at NASA's Jet Propulsion Laboratory (JPL) in Pasadena, Calif., have generated the highest-resolution images to date of this asteroid using the Deep Space Network's 230-foot antenna at Goldstone, Calif.

The images were taken between Dec. 17 and Dec. 22 when the distance to the near-Earth object (NEO) was narrowing from 7.3 million miles to almost the flyby distance.

As before, NASA helpfully pointed out that while this passing is rather close when compared to say, the infinite scale of the universe, there is no cause for alarm and you can enjoy your chestnuts by the fire without fear. 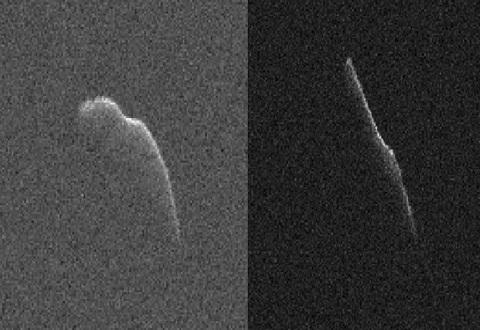 "There is no cause for concern over the upcoming flyby of asteroid 2003 SD220 this Christmas Eve," Paul Chodas, manager of NASA's Center for NEO Studies at JPL, wrote in a Dec. 23 statement. "The closest this object will come to Santa and his eight tiny reindeer is about 28 times the distance between Earth and the moon."

Thanks to NASA scientists we also know more than just whether or not the asteroid will strike the planet: Radar images data suggest that 2003 SD220 is highly elongated and at least 3,600 feet long -- about 1,000 feet taller than the Burj Khalifa, the world’s tallest building.

"The data acquired during this pass of the asteroid will help us plan for radar imaging during its upcoming closer approach in 2018." Lance Benner, who leads NASA's asteroid radar research program at JPL, wrote in a statement.

This isn't the first time NASA has tracked a tumbling celestial body on the eve of a holiday. In October, the space agency's scientists tracked the asteroid 2015 TB145, which according to the space agency constituted a safe flyby of Earth --at a distance of 300,000 miles over the Halloween weekend.

[Read about the recent success of SpaceX.]

NASA scientists later determined that the celestial object was more than likely a dead comet that has shed its volatiles after numerous passes around the sun, releasing images that showed an eerie resemblance to a skull.

In August, the space agency took some time off from decoding the volumes of data beamed back from their New Horizons mission to Pluto to reassure us all that we weren't in any danger from annihilation by asteroid.

How tragically ironic -- that the debris of our own scientific advances could make things more difficult in the future.
Reply  |  Post Message  |  Messages List  |  Start a Board

With all the reassurances, one has to wonder about the hypothetical/unlikely event of an asteroid actually presenting serious danger -- and whether we would be told "Don't Panic" like all the other times (while the well-connected quietly hide in their bunkers).
Reply  |  Post Message  |  Messages List  |  Start a Board
InformationWeek Is Getting an Upgrade!