The Rover looks like an oversized hockey puck, fits in a backpack and can connect up to to eight laptops or other devices to the Internet at claimed download speeds of 3 to 6 megabits per second.
Antone Gonsalves
Contributor
August 30, 2010 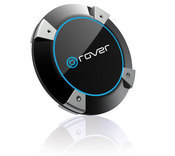 Clearwire Rover Mobile Hotspot Device
Clearwire has launched a mobile hotspot device that works on the company's 4G wireless network and comes with prepaid subscription plans to attract young adults. The Rover, introduced Monday, is available online through Clearwire in the roughly three-dozen U.S. metropolitan areas where the company offers its WiMAX service. In addition, the device can be purchased through Best Buy and select independent wireless dealers in Houston and St. Louis.

The Rover looks like an oversized hockey puck and is about four inches in diameter, an inch thick and weighs one and a half pounds. The device sells for $150 and can connect up to eight laptops or Internet-enabled devices through their Wi-Fi wireless modems.

Clearwire also unveiled the Rover Stick, which is a USB modem that connects any Windows or Mac OS X laptop or desktop to the company's 4G network. The device sells for $100. Clearwire claims the devices can deliver download speeds of 3 to 6 megabits per second, with bursts of 10 Mbps. The multi-user device has a range of about 100 feet, and a battery life of up to four hours of nonstop use.

In launching the devices, Clearwire is targeting young adults between 18 and 29. In an attempt to attract so-called Gen Y adults, the company is offering prepaid, also called pay-as-you-go, data plans.

"Rover's target audience has never known life without Internet," Seth Cummings, general manager for Rover, said in a statement. "They love their devices and they want as much speed and capacity as possible, without the limits and commitments of most mobile options."

Clearwire is offering data plans of $5 a day, $20 a week or $50 a month for unlimited Internet usage. There is no long-term contract and subscribers don't need a credit card to activate service. In addition, buyers get two days of service at no charge to ensure that Clearwire coverage is sufficient. The devices come with a 14-day return policy.

Clearwire is in the process of deploying its WiMAX 4G network across the U.S. and expects to have its service running in almost 50 cities by the end of the year, including New York, Los Angeles, San Francisco, Boston, Denver and Miami. The company plans to cover 120 million Americans by the end of the year, or about a third of the population. This month, Clearwire announced that it would start testing this year an alternative 4G technology called LTE, or Long-Term Evolution. The LTE network would run alongside the WiMAX offering, making Clearwire "technology agnostic," company executives say.