Combining satellite technology, public data, and crowdsourcing, the World Resources Institute, Google and more than 40 partner organizations have launched Global Forest Watch, an online community-oriented map designed to track changes in forests around the world in near real-time.

Global Forest Watch provides data layers that describe forest change, forest cover (tree density), forest use, conservation data, and reports about forest-related issues from users. It provides insight into the health of the world's forests, which remain vital economic, social, and environmental assets for every nation.

"That's the equivalent of losing 50 soccer fields' worth of forests every minute of every day for the past 13 years!" said Crystal Davis, director of Global Forest Watch at the World Resources Institute, and Dave Thau, developer advocate for Google Earth Engine, said in a blog post. 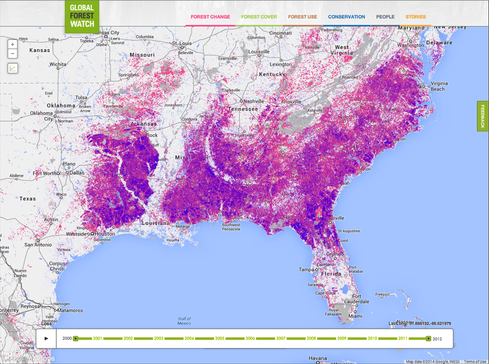 The news isn't all bad, however. Davis and Thau point point out that while Brazil, with its vast Amazon rainforest, has long been one of the top countries for deforestation, the rate of deforestation there declined by an average of 1,318 square kilometers per year in the past ten years. Though the rate rose last year, Brazil's example demonstrates that continued forest loss is not inevitable.

At the same time, the need to manage deforestation is evident in the increasing rates of tree loss in countries like Angola, Indonesia, Malaysia, Paraguay, Peru, and Tanzania.

Global Forest Watch relies on over 650,000 Landsat 7 satellite images processed by Google Earth Engine, the company's cloud-based platform for geo-data analysis. Some 20 terapixels of image data were processed, requiring one million CPU-core hours on 10,000 computers operating in parallel for several days to cover the study's 13-year time frame. Google researchers estimate that the calculations would have taken a single computer 15 years to complete.

The system builds on Forest Monitoring for Action (FORMA), a satellite-based forest assessment system introduced in 2009 by the Center for Global Development.

Google has a long history of using its mapping technology for public health and crisis response. Not all of its efforts have been unqualified successes. Despite its high public profile and good intentions, Google Flu Trends has been criticized for inaccuracies arising from an inadequate data model. Global Forest Watch should avoid that trap because it depends primarily on satellite images, which unlike search queries do not depend heavily on interpretation.

Thomas Claburn has been writing about business and technology since 1996, for publications such as New Architect, PC Computing, InformationWeek, Salon, Wired, and Ziff Davis Smart Business. Before that, he worked in film and television, having earned a not particularly useful ... View Full Bio
We welcome your comments on this topic on our social media channels, or [contact us directly] with questions about the site.
Comment  |
Email This  |
Print  |
RSS
More Insights
Webcasts
Unifying Your Endpoint Security Strategy
Fact or Fiction? The Truth About Cloud Native Security
More Webcasts
White Papers
Incident Readiness and Building Response Playbook
How to Build Your Incident Response Plan
More White Papers
Reports
Forrester Report: The Total Economic Impact Of Bizagi's Low-Code Intelligent Process Automation Platform
State of the Intelligent Information Management Industry in 2021
More Reports