Open source programmers and maverick election officials want to improve the way we vote, register to vote, and count the votes. Wish them luck.

The last surge of investment in voting technology happened a decade ago. Since then the regulatory apparatus for election reform has broken down, and voting machines themselves are starting to fail as well. Every election shines attention on a different bit of dysfunction, from long lines at polling places to cyber security risks.

Open source to the rescue? Maybe, although probably not in time to have much impact on the 2016 election. Silicon Valley's Open Source Election Technology Foundation (OSET) is methodically chipping away at the problem, building credibility with software for voter registration and election-night reporting while also working on the more challenging problems of improving the casting and counting of votes. Meanwhile, a few brave -- and impatient -- county election officials are embarking on their own voting technology design and development projects, which may or may not intersect with OSET's work.

[Does everything have to be partisan? Read Wanted: Honest Algorithms For Voter Redistricting.]

The bottom-line goal of these initiatives is the same: to move away from reliance on proprietary technology while boosting transparency and leaving a reliable audit trail -- making it clear that the victor in any contest really is the candidate who won the most votes.

"[Current voting machines] certainly weren't constructed with transparency and accountability in mind," bemoaned E. John Sebes, co-director of OSET and CTO for the TrustTheVote Project. "There's a lot of demand for that, but not a lot of money for [it]." One of the ways OSET wants to help is by reducing the cost of doing the right thing.

The last purported technological fix to what can go wrong in elections arguably backfired. The 2002 Help America Vote Act (HAVA) was partly a reaction to the Constitutional crisis of 2000, when a disputed vote count in Florida caused the US Supreme Court to decide the election in favor of George W. Bush. That was the election of hanging chads and the Palm Beach butterfly ballot, which raised issues of unreliable analog technology (punch card voting) as well as usability and design. HAVA set new standards and provided federal funds for voting upgrades, but critics saw this as a boon for a handful of digital voting technology vendors and worried that the introduction of touchscreen technologies raised as many questions as they answered. 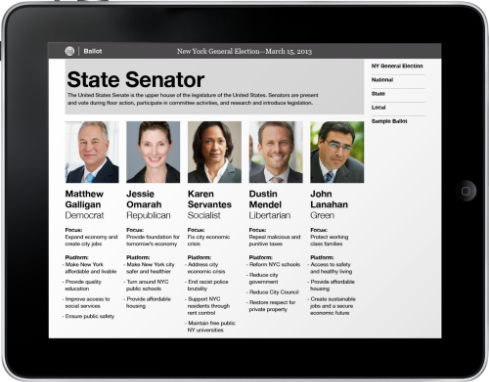 In principal, a good digital user interface should filter out errors such as voting for two people in the same race (or appearing to do so because of smudged ink or torn paper). Yet stories about poorly calibrated devices recording votes in favor of the wrong candidate abounded, and all-digital systems meant votes could evaporate with a computer memory or storage glitch, leaving no physical record such as a punch card for recount workers to hold up to the light. The outcry over the lack of a verifiable paper trail drove many jurisdictions back to optical-scan voting systems, and the next generation of technology is also likely to use a combination of paper ballots and digital tabulation. The new digital reformers want to go further, making voting systems more affordable and accessible to routine auditing, debugging, and inspection.

The target system reformers are converging on would provide voters with a ballot marking device that produces a neatly marked paper ballot, which then gets fed into a scanner. The voter will get the opportunity to verify that votes have been recorded correctly by the computer system, and the paper is retained for subsequent recounts.

Absentee voters and others voting by mail could still fill out the exact same ballot by hand. At polling places, touchscreen devices and computer-assistive technologies for disabled voters could still be used, as long as they produce a paper ballot for backup.

Greg Miller, co-executive director and chief development officer at OSET, said the group of technologists who started the project were inspired to do something proactive after witnessing another round of election glitches in 2006. "We realized we could spend a lot of time whining about what's wrong with these machines, [arguing that they are profitable for the vendors but not very functional]," he said. "But instead of just talking about what's wrong, we ought to be working on fixing it."

In January, the bipartisan Presidential Commission on Election Administration warned of an "impending crisis in voting technology" in its report on the American voting experience: "By the end of the decade, a large share of the nation's voting machines, bought 10 years ago with HAVA funds, will reach the end of their natural life and require replacement. To address this impending challenge and to usher in the next generation of voting machines, the standards and certification process for new voting technology must be reformed so as to encourage innovation and to facilitate the adoption of widely available, off-the-shelf technologies and 'software-only' solutions."

Unfortunately, while that commission was bipartisan, little else in Washington is. Any change in how elections are conducted carries with it some chance of favoring one party over the other, and suspicions run deep. With Congress blocking President Obama's nominations to the Elections Assistance Commission created as part as HAVA, federal work on standards for election technology is moribund. That's one reason election technology vendors are reluctant to invest in new systems, which might never get certified.

"This is a market that's so screwed up that it's practically not a market," Sebes noted. With an open source project, OSET can invest without expecting to make a profit. Meanwhile, with the federal government gridlocked, state and local officials are reasserting their authority.

"We're trying to break the mold," Los Angeles County clerk and registrar of voters Dean Logan said in an interview. "We want the specifications to be developed outside of the competitive marketplace. We don't want specifications designed around a profit model." Los Angeles sat out the last round of voting technology upgrades, concerned that the equipment on the market wouldn't meet its capacity needs. Since then, the voting technology market has consolidated further and innovation has virtually ground to a halt. At the same time, LA's current voting technology is obsolete, at risk of breaking down, and out of compliance with the law if not for being "grandfathered" in.

All these factors led Logan to decide the only way to obtain technology that met his requirements was to create it himself. That doesn't mean LA will hire the programmers and develop the software itself, he said, but it will set the expectations, select the contractors, and own the resulting code. The famed technology design firm Ideo consulted with LA on the equipment mockups and conceptual designs that now need to be turned into a working system.

"This is where the principle of public ownership comes into play," Logan said. "We're large enough that we have the resources to support a system on our own. Most jurisdictions in the country don't have that." He is not averse to sharing that work with others, or taking advantage of open source efforts, as long as he gets something that the county can control, inspect, and fix without being dependent on an outside vendor. Although he has no formal relationship with OSET so far, he believes its efforts are consistent with its goals and the organization will likely put in a proposal to provide the software, or components of it.

Travis Country, Texas, is working on a similar project. Many other voting officials are looking for new and better solutions but are not brave (or crazy) enough to go the do-it-yourself route. They would be very happy if someone else would make the effort and be willing to share.

With its TrustTheVote project, OSET hopes to provide solutions to election technology challenges that everyone will be able to tap into. Originally known as the Open Source Digital Voting Foundation, the group changed its name to avoid the conflation of "digital" with "web-based." While it draws organizational inspiration from web-centric open source organizations like Mozilla and the Apache Software Foundation, OSET does not promote moving voting to the web, where cyber security issues

I'm quite ready to be cynical about the potential for fraud with electronic voting systems, but then we've had plenty of fraud and bad outcomes with traditional system. So I guess I'm open to a different take on the same old problems.
Reply  |  Post Message  |  Messages List  |  Start a Board
InformationWeek Is Getting an Upgrade!