A 300-page assessment of controversial US intelligence practices presented to the White House Wednesday concludes that although the surveillance activities of the National Security Agency are not illegal, Congress should place greater limits on the government's ability to collect information on US citizens.

"In our view, the current storage by the government of bulk meta-data creates potential risks to public trust, personal privacy, and civil liberty," a panel of five national security specialists wrote in the report.

The report, "Liberty and Security in a Changing World," made 46 recommendations to President Obama to address widening concerns over the invasive data-gathering techniques of the National Security Agency.  President Obama commissioned the panel in August to review the use of intelligence and communications technologies to protect against national security threats while still preserving the personal privacy and civil liberties of citizens.

Among the major recommendations in the report:

The panel also recommended constraints on US surveillance of non-US citizens. Among other measures, the panel urged that surveillance must be properly authorized and that surveillance orders demonstrate national security interests are at stake. The measures would make the decision to spy on foreign leaders subject to greater scrutiny. 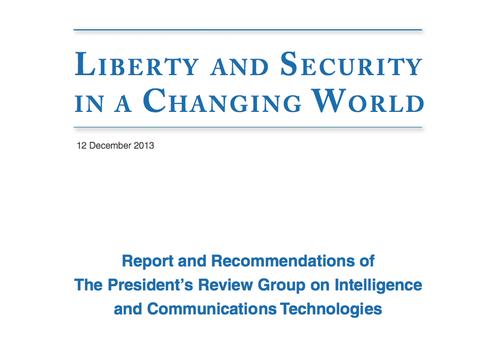 "The implicit message is that the programs were legal and should continue, albeit with more oversight and restraint," said James Lewis, a senior fellow and director of the Strategic Technologies Program at the Center for Strategic and International Studies.

"The core recommendations expand oversight and transparency in beneficial ways and reverses the situation where those who wanted to use certain tools were also the ones who approved their use," he said.

If adopted, he said the recommendations "would go far to bring the intelligence programs, and the laws passed after (the Sept. 11, 2001 terrorist attacks) into line with the constitutional requirements for judicial oversight and with reforms that have guided intelligence collection since the 1970s."

Lewis anticipated that critics, particularly those hoping to take political or commercial advantage of public disclosures of secret NSA documents by former contractor Edward Snowden, will dismiss the report as a whitewash. "It is not," he says, noting that the report "shifts the terms of debate over the Snowden leaks in beneficial and necessary ways."

The report lays out a series of recommendations and rationales, he says, that if implemented, would do three things: provide greater transparency on intelligence programs and decisions; amend Patriotic Act Sections702 and 215, limiting how they can be used; and improve intelligence coordination with allies and partners.

@ThomasClaburn, Glad to see Google standing up for transparency when it comes to government requests for data (and censorship.)  Reader, check out Tom's latest report on Google's fight for transparency at  add.vc/hlz
Reply  |  Post Message  |  Messages List  |  Start a Board

One thing that may be hard for non US citizens to appreciate is how much the terrorist attacks of 9/11 altered the mindset of government to dig deeper, and get more serious about preventing similar attacks in the future.  Has the pendulum swung too far.  While more and more Americans and American business are now saying probably yes, those whose family members were killed in 9/11 might still argue if it saves others' lives, the price is worth it.

What the Snowden revelations have done is put the debate back on the table for all citizens to question. This report at very least lays out the issues clearly.  The question is are citizens incensed enough to demand the changes enough to get Congress to act?  Or will they continue to pay privacy lip service while clinging to the  conveniences the digital age has seduced them with?

If only it were as easy as not buying American...every government in the world with any resources and an active intelligence service is trying to do the same thing, with varying degrees of success. And just avoiding Microsoft and other US products won't keep the NSA from pulling your calls and emails off fiber optic cables or wireless towers somewhere in the world.
Reply  |  Post Message  |  Messages List  |  Start a Board
InformationWeek Is Getting an Upgrade!