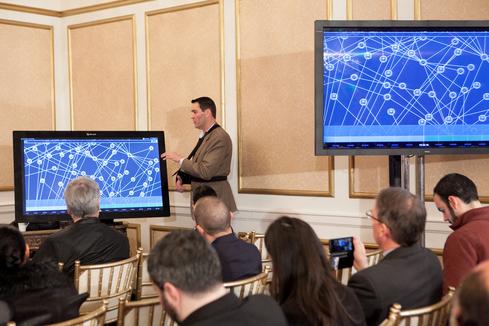 On the day of the Christian Science Monitor event, Pound showed up with his right arm in a cast.

That didn't do much to slow him down. During his demo of Plan X's GUI, Pound seamlessly demonstrated Plan X's smooth drag-and-drop, touch-based interface on a large monitor -- even marveling to himself about how easy and "great" the touch-screen interface is to use.

"Touch has become a native, intuitive interface where people are … using these things effectively," Pound told event attendees, noting that DARPA had conducted numerous usability studies to determine how to proceed with Plan X.

Traditionalist users aren't tied to the touch interface, however. Pound said they can still use a keyboard and a mouse if they prefer.

I knew I could always count on you to say something so basic,so true ,so Simply!

What I would also like to add here is that with the Increasing amount of automation happening today in the IT-Security stuff;you don't really need Hard-core Super-trained Security Ninjas to run IT Security Shops enterprise-wide.

Sure its always good to have extra skills on board but the Companies/Organizations which provide most of these Security Tools have very-very good Customer Service Reps(who are all very well-versed in the art of Security today).

So if a Company has employees who may/may not be at cutting-edge its perfectly allright today;they can still manage comfortably.

On the other side,I also buy the Assertion(not entirely though) that a large part of the increased Security Awareness/Fear is just the result of more Connectivity (and/or media scaremongering) on part of Security Providers???

I read way too many essays which claim encryption, or authentication -- is too complex for ordinary people

I could teach most folks familiar with eMail to use PGP or GnuPG via Thunderbird's plug-in ENIGMAIL is an hour or so.

the take-away from this note is simple:   as soon as we have better packaging for this technology ( PGP; GnuPG ) everyday computer users will be able to make advantage of it in most everything they do

PGP/GnuPG provides real authentication, integrity, and security: when you need it.

authentication : proving your signature on a digital document

intergity : proving the validity of a digital document

security : restricting the content of a digital document to authorized personel