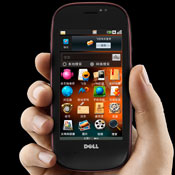 (click image for larger view)
Dell Mini 3 Android Smartphone
After years of speculation and "proof of concept" devices, Dell officially unveiled its first entry into the smartphone market with an Android-powered device set for China and Brazil.

The Mini 3 smartphone is somewhat reminiscent of Apple's iPhone with a full touchscreen interface, but Dell did not release full specifications for the device. The company did say the handset will be powered by the Google-backed Android operating system, and it will be coming to the carriers China Mobile and Claro.

Dell comes into an increasingly competitive smartphone space filled with major players like Apple, Nokia, Research In Motion, and Samsung. It was a smart decision to get its feet wet with smartphones in the emerging markets because these are much "greener fields," and its competitors don't have as strong of a grip on the market, said Jack Gold, principal analyst at J. Gold Associates. Gold said the Mini 3 didn't appear "overly compelling," but it is a good start and it gives Dell an opportunity to refine its smartphone division before bringing it to mature markets like North America or Europe.

Additionally, China Mobile is an attractive partner for Dell because it is trying to get many of its more than 500 million subscribers to upgrade to advanced devices.

"Ultimately, they have to be in this space if they're going to be a full computer company because mobile's going to play an important role as we move forward," said Gold.

Dell did not tip its hand for further smartphones plans, but it did say it already has deals with various carriers, including AT&T and Verizon Wireless, to create opportunities in the future.

"Our entry into the smartphone category is a logical extension of Dell's consumer product evolution over the past two years," said Ron Garriques, president of Dell's global consumer group, in a statement. "We are developing smaller and smarter mobile products that enable our customers to take their Internet experience out of the home and do the things they want to do whenever and wherever they want."

As mobile computing continues to converge, device makers are increasingly finding themselves battling for market share with new competitors. Computer-maker Acer also recently jumped into the smartphone space, and the largest handset maker in the world, Nokia, just released a netbook powered by Windows 7.


InformationWeek Analytics has published an in-depth report on the state of enterprise storage. Download the report here (registration required).