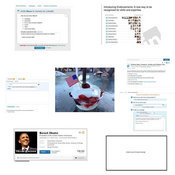 8 LinkedIn Etiquette Mistakes
(click image for larger view and for slideshow)
London's chances of creating its own Silicon Valley-style high-growth business ecosystem, or a new East End-based Tech City might founder due to a lack of support by venture capitalists and local money managers.

A third of prospective British Steve Jobs surveyed complained they are being hindered by a lack of capital, whether sourced from institutional or private investors, while almost the same percentage, 29%, believe their company is missing significant business opportunities because they cannot secure funding in time. Nineteen percent of respondents said they had to pink slip staff because they couldn't secure the necessary funding to keep them.

[ Will tech funding efforts like these be enough? Read London's New VC Fund For Tech Startups. ]

Almost a quarter (23%) of respondents said that the length of time it took to secure capital is an issue, while 44% of the smallest startups -- companies making less than £1 million ($1.5 million) -- said they are concerned about accessing credit this year.

The worry is backed up by British entrepreneur Mike Lynch, who in an interview Wednesday with London financial paper City A.M. agreed Britain's chances of building a convincing native IT sector are being seriously hampered by local investor "timidity."

"In the venture capital world, London is considered dysfunctional," he claimed, adding that when companies do get to size -- about £100 million ($151 million) -- almost no British tech CEOs choose to IPO but instead opt to "sell to a larger company and move on."

British tech firms have been so "battered" by London's money men, said Lynch, that "they tend to sell out or build up to take it to Nasdaq." Although Lynch's brand might be somewhat damaged in American eyes following the bad blood over HP's claims it had spent too much on his Cambridge-headquartered software company Autonomy, he still enjoys high status in the U.K., where journalists refer to him as "the U.K.'s first software billionaire."

Steve Leith, who heads up Grant Thornton's early-stage technology team, said there is a "stark contrast" between U.K. and U.S. tech funding. In the U.K., "whilst there is an increasing flow of angel capital, we see a growing gap for businesses requiring investment of £500,000 to £2 million ($755,000 to $3 million)", he said.

In the U.S., in contrast, the cycle of tech entrepreneurs reinvesting in start-ups is "fully developed and the VC community has a greater appetite for risk," he said. "[British] businesses need development capital," he warned. "Without it they are not only in danger of missing their growth opportunity, but in having to make redundancies, or at worst failing completely before they've really even begun."