So now access to FaceTime on one's current cellular data plan is a human right. Net neutrality proponents always played a weak hand, both legally and logically, and the controversy over AT&T and FaceTime on the iPhone and iPad just exposes further the vacuousness and arbitrariness of their positions.
Larry Seltzer
Contributor
September 23, 2012

A few years ago, before and just after the 2008 election, a lot of people were really excited about Net neutrality, a series of policy ideas alleged to keep the Internet "free" and "open." Many of these ideas were codified by the FCC at the end of 2010 in its Open Internet rules.

I remember a lot of excitement in certain circles that the election of Barack Obama would usher in a new era where the major ISPs would be kept under the FCC's thumb. Candidate Obama declared, "I am a strong supporter of Net neutrality." But, like so much of the high-minded talk in the campaign, it amounted to little after the election.

In April 2010 the FCC lost a case in the U.S. Court of Appeals for the DC Circuit in which the court stated unanimously that the FCC lacked the statutory authority to enforce Internet network management rules against Comcast. Nevertheless, the next month, the FCC asserted authority to regulate the Internet in this way. Then, in the November 2010 congressional elections, all 95 Democratic congressional candidates who had signed a progressive pledge to support Net neutrality lost their elections. Yes, there were many other more prominent issues in that election, but clearly Net neutrality was not a big deal to a whole lot of real people.

That was almost two years ago and the FCC hasn't tried to enforce the Open Internet rules and it's not hard to see why: It knows it would lose in court. Even a sympathetic district court would probably have to defer to the appellate court decision.

But an actual legal basis isn't important for Free Press, Public Knowledge, and the New America Foundation's Open Technology Institute who, this past week, notified AT&T of their intent to file a formal complaint with the FCC. Progressive groups were unhappy with the Open Internet rules they now seek to enforce, considering it watered down.

The reason for the complaint is AT&T's policy related to FaceTime in iOS 6. Here's how AT&T explains it, in a statement quoted on MacRumors:


AT&T will offer FaceTime over Cellular as an added benefit of our new Mobile Share data plans, which were created to meet customers' growing data needs at a great value. With Mobile Share, the more data you use, the more you save. FaceTime will continue to be available over Wi-Fi for all our customers. 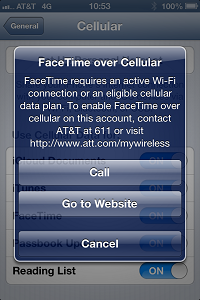 AT&T: No FaceTime for you unless you change plans.
The unstated implication of this policy is that users who remain on their pre-Mobile Share accounts will not be able to use FaceTime over cellular, and this seems to be the case. I have an iPhone 4S running iOS 6 and am denied access to FaceTime over cellular connections, although my phone is on a corporate data account with unlimited data. I don't know if policy changes are planned for such accounts, but I'm looking into it.

Most of the time, conflicts over Net neutrality revolve around practices that carriers and ISPs would call network management. That appears not to be the case here; rather, AT&T seems to be using FaceTime as a feature to entice users to shift to shared data plans. I'm sure that shared data plans actually are in the interest of many consumers and will become more so over time, but for many others they just mean higher costs. What are such folks to do?


Shared mobile data plans have the potential to complicate accounting for companies with a BYOD policy.

First, if they don't have a contractual commitment they can change carriers. Second, they can still do FaceTime over Wi-Fi, as before. Third, they could use another videoconferencing product such as Skype. Skype has a number of advantages over FaceTime and has supported video over cellular data connections for some time. Instead of arguing that the government should force AT&T to change its offerings, maybe these so-called public interest groups should tell people to take their business elsewhere. That would get AT&T's attention.

In the meantime, I guess I'm screwed, because I can't use FaceTime over cellular networks. How am I going to exercise my rights to the videoconferencing protocol of my choice, over whichever network architecture I choose, for which the founding fathers and countless U.S. soldiers fought and died? What is this, the gulag?