7 Examples: Put Gamification To Work
(click image for larger view and for slideshow)
DoubleDutch introduced a free mobile enterprise social network just in time for Enterprise 2.0 Boston, where it is also powering the mobile app for the conference.

Pride is a simple "what are you working on" microblogging tool, available as a download from the iTunes App Store and Google Play Store. Pride simplifies the process of posting an update with ready access to what DoubleDutch calls work objects, like locations, projects, and customers. Wherever possible, the software tries to infer those connections rather than making the user enter them.

"A lot of times we can tell the customer you're meeting with by the location you're at," DoubleDutch CEO Lawrence Coburn said. In addition to connecting geographic coordinates to customer locations, known as "geofencing," DoubleDutch uses "chronofencing" for inferring connections from the time of a visit to a particular location, as well as techniques for tracking mobile phone behaviors such as emails or texts sent and received, Coburn said.

While the best-known location-based mobile apps player, Foursquare, focuses on consumers and the retailers who want to connect with them, DoubleDutch has positioned itself as an enterprise mobile apps maker. Pride shares some of the characteristics of DoubleDutch's Hive mobile CRM app. Hive is more specific to the needs of salespeople, who need to track things like the stages of a pending deal from prospect to closed account. Pride is a more general tool that could be used by marketing and business development executives to share their activities and keep up with those of their coworkers.

DoubleDutch also sees Pride as a free application to show organizations the potential of mobile collaboration, which could then lead them to become customers for Hive and other commercial products. Hive is still officially in beta (although it's offered for sale on the DoubleDutch website), with the official production version slated for availability in August, Coburn said. Most of the large implementations of Hive to date have been "more like custom apps," he said, but DoubleDutch has made a series of design changes to give the base product broader appeal.

"You can imagine a future release where a supply worker walks into a warehouse, and the app would prompt him, 'did you restock XYZ?'" said Prankaj Prasad, DoubleDutch co-founder and head of business development.

As for the base social networking functions provided by Pride, Prasad said, "We believe that like email, this is a base foundational service and should be free." With a free offering specifically designed as a mobile-first app--actually, a mobile-only app, except for the administrator's dashboard--Prasad said DoubleDutch ought to be able to take market share away from Yammer, which he portrayed as primarily a desktop browser app. That explains Microsoft's interest in acquiring Yammer, he said, "since Microsoft owns the desktop and Yammer is a desktop-first social collaboration tool."

Pride is based on a social workplace app DoubleDutch created more than a year ago for use by its own employees, the co-founders said. 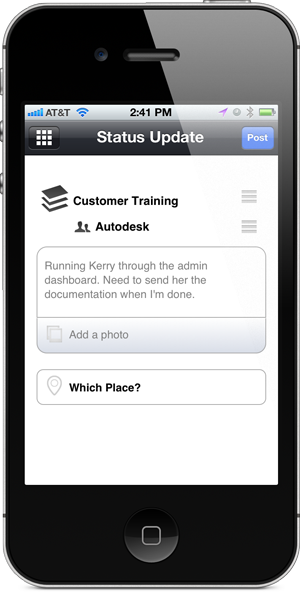