A complaint filed with the Federal Trade Commission by the Electronic Frontier Foundation claims Google isn't living up to its pledge to protect student privacy.

Google has been violating its promise to respect student privacy, according to a Dec.1 complaint filed with the Federal Trade Commission (FTC) by the Electronic Frontier Foundation (EFF).

As a signatory of the Student Privacy Pledge, Google has said it will "not collect, maintain, use or share student personal information beyond that needed for authorized educational/school purposes, or as authorized by the parent/student."

But the EFF claims that Google has been using students' browsing data and other information for unauthorized purposes. Specifically, the complaint makes three allegations.

First, it says that when students are logged into their Google for Education accounts, Google collects information about students' use of non-educational Google services for its own benefit.

Second, it says that the Chrome Sync feature in Google's Chrome browser is enabled by default on all Google Chromebooks, including those sold to schools as part of Google for Education. This allows Google to collect students' entire browsing history, even if unrelated to education, for its own benefit.

Third, it says that the administrative settings in Google for Education allow administrators to choose settings that share student information in violation of the Student Privacy Pledge. 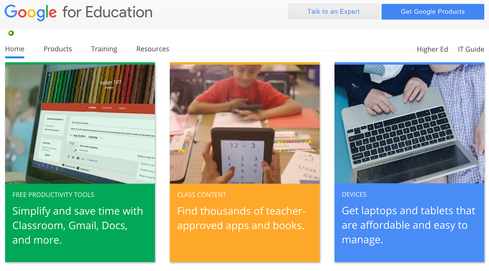 In an emailed statement, Google insisted that its actions remain consistent with its commitments. "Our services enable students everywhere to learn and keep their information private and secure," a spokesperson said. "While we appreciate EFF's focus on student privacy, we are confident that these tools comply with both the law and our promises, including the Student Privacy Pledge."

An FTC spokesperson, asked whether the agency intends to act on the EFF petition, did not immediately respond.

According to the EFF, Google has said it intends to disable Chrome Sync on school Chromebooks, but the EFF asserts the company needs to do more to meet its privacy commitments.

In a statement, EFF staff attorney Nate Cardozo said that making privacy claims and then not honoring them amounts to a deceptive and unfair business practice under FTC rules.

"Minors shouldn't be tracked or used as guinea pigs, with their data treated as a profit center," said Cardozo. "If Google wants to use students' data to 'improve Google products,' then it needs to get express consent from parents."

Google has a long history of run-ins with the FTC. Earlier this year, it saw its Internet search practices endorsed when the agency's investigation concluded the company had acted lawfully.

But the FTC has also penalized the company. Last year, Google agreed last year to pay $19 million to settle an FTC complaint that it had unlawfully billed parents for unauthorized in-app purchases made by minors. And in 2012, Google agreed to pay $22.5 million to settle FTC charges that the company had placed tracking cookies on devices using Apple's Safari browser and served targeted ads despite privacy commitments that it would not do so.

Thomas Claburn has been writing about business and technology since 1996, for publications such as New Architect, PC Computing, InformationWeek, Salon, Wired, and Ziff Davis Smart Business. Before that, he worked in film and television, having earned a not particularly useful ... View Full Bio
We welcome your comments on this topic on our social media channels, or [contact us directly] with questions about the site.
Comment  |
Email This  |
Print  |
RSS
More Insights
Webcasts
Fintech at SaaS speed: Navigating the scale & security challenge
Monitoring Critical Cloud Workloads
More Webcasts
White Papers
The State of Zero Trust Security Strategies
How DevOps Delivers on User Experience with Observability
More White Papers
Reports
A Practical Guide to Enabling 5G Deployments
Are We Cyber-Resilient? The Key Question Every Organization Must Answer
More Reports

After this story was filed, Google has published a blog post responding to the EFF.
Reply  |  Post Message  |  Messages List  |  Start a Board
InformationWeek Is Getting an Upgrade!