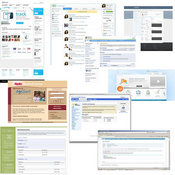 Is A Personal Health Record In Your Future?
(click image for larger view and for slideshow)
The Electronic Health Records Association, which represents dozens of software vendors, has joined a chorus of organizations and asked the federal government to change the reporting process that will be used by hospitals and medical practices to qualify for Meaningful Use Stage 2.

The EHR Association was generally supportive of rule proposals for Meaningful Use Stage 2, but suggested several modifications in comments the group formally submitted last week to the Centers for Medicare and Medicaid Services and the Office of National Coordinator for Health IT. The comments were made in response to the notice of proposed rule-making (NPRM) on the Meaningful Use Stage 2.

The major proposed change would alter the timetable that eligible providers and hospitals use in reporting their Stage 2 compliance to the federal government. Instead of demanding a full year of reports to prove compliance, the association said using a three-month or six-month reporting period would give doctors and hospitals more time before the reporting period started to deploy, implement, modify, and embrace their new systems, Mark Segal, co-chair of EHR Association's public policy leadership workgroup and VP of government and industry affairs at GE Healthcare IT, said in an interview with InformationWeek Healthcare.

EHR Association's suggestion about shortening the reporting period for Stage 2 is similar to comments submitted to CMS and ONC by several other other industry organizations, including College of Health Information Management Executives (CHIME) and the American Hospital Association.

[ Learn how to love your EHR, or at least How To Ease EHR Frustration. ]

CHIME last month also recommended that eligible providers and hospitals be allowed to use a continuous 90-day EHR reporting period for Stage 2, "mimicking the approach used by CMS in Stage 1."

The association told CMS in a letter that the members of the health IT industry as well as the government advisory group HIT Policy Committee had agreed that "a full 18 months is needed between release of the final rules and when providers need to upgrade" their systems to comply with the final rules. Shortening the reporting time would allow healthcare providers more flexibility in implementing and upgrading their systems to meet Stage 2 requirements, said Segal.

From an EHR industry perspective, a too narrow timeline for implementation, upgrades, and subsequent MU reporting by providers puts pressure on vendors, health IT services firms and IT organizations that are working with hospitals and eligible clinicians, and also puts training pressures on the providers themselves.

However, by slashing the required reporting period from one year to 90 days or 180 days, healthcare organizations have more time to get their implementations and upgrades working properly.

"Shorter reporting lets us load-balance implementation with customers," said Segal. "There are physical limits on the pool of people who can work on these projects," he said.

The American Hospital Association in its comments to CMS also said it wants the agency to give hospitals a 90-day reporting period in the first year of stage 2, just as they have in Stage 1.

In addition to modifying the reporting period for Stage 2 compliance, the EHR Association in its comments to CMS and ONC also requested changes in the number of clinical quality measures required in the rules.

"We are concerned that EHR developers and their clients will be challenged by the large number of proposed clinical quality measures and the dearth of available detail on their final specifications," said EHR Association in a letter to CMS.

"The data elements needed to support the proposed and final measures will add to the large volume of data elements proposed for meaningful use and certification. As a result, there could be increased development and implementation complexity that will make it especially challenging to develop quality data capture workflows that are usable and integrate well into clinicians' workflows," said EHR Association in its letter.

Segal said the government's proposals include large number of clinical quality measures but a lack of specifications, as well as definitions that "need to be tightened up," making it difficult for vendors to plan and write code for their software products, especially in light of the compliance timelines proposed by the government.