Creating cyber physical systems --building blocks for the Internet of Things -- is the next big step in the evolution of our interconnected world, US CTO Todd Park proclaimed at the SmartAmerica Expo hosted this week by the Presidential Innovation Fellows program.

This kind of "integrated hybrid of cyber and physical systems can respond in real time," said Park, the White House leader charged with boosting technological innovation within the government. The cyber physical combination offers adaptability, reliability, safety, cost-effectiveness, and a host of other positives, he said.

For instance, while Google has received media attention for its work on driverless cars, Honda and Audi, working with Qualcomm and INRIX, presented more immediate potential capabilities such as "vehicle-to-pedestrian," with the car able to communicate directly to a pedestrian's smartphone, improving safety.

Another possible application of driverless cars is of great interest to the military -- vehicles that can drive themselves safely around humans in a real-world setting. The Autonomous Robotics for Installation and Base Operations (ARIBO) team -- including the US Army Tank and Automotive Research, Development, and Engineering Center; West Point; Ft. Bragg; Induct Technology; Unicor; Comet Consulting; the University of Texas at Arlington; and Stanford University -- brought a prototype ARIBO. 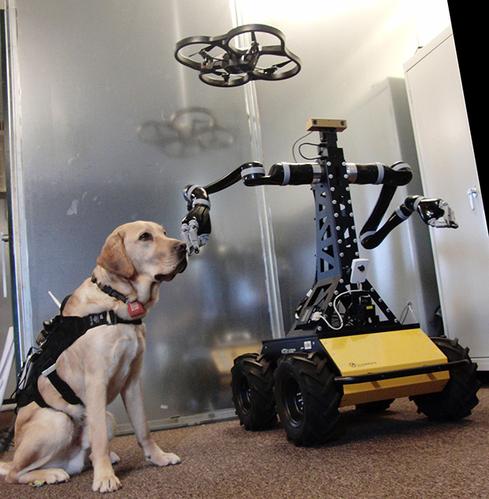 In the SERS scenario, rescue dogs could be equipped with harnesses containing cameras, sensors for gas and other chemicals, GPS, and monitors for the dogs' health. A drone overhead could create an on-demand WiFi network, gathering data from the dogs while simultaneously providing connectivity for cellphones in the area (since cell towers might be down). Responders could use the cellphones with an app to crowdsource information on where they need to go, learn what they will find when they get there, and send pictures to provide situational awareness, while citizens could use the app to tell responders what they need.

All of this information would be sent to a command-and-control center that can coordinate all the data flows, set priorities, and assign and track resources.

In a nice bit of synchronicity, WPI incorporated the robot it has entered in the DARPA Robotics Challenge. Since the challenge in that two-year-long competition is for robots to show the kind of skills that emergency responders need, such as climbing a ladder or opening a valve, adding the robot provides additional capabilities and sources of data for the command center.

In Montgomery County, Md., a partnership including the county government, Montgomery Housing Partnership, the US Department of Homeland Security, MIT, the University of California Irvine, IBM, Senseware, SIGFOX, Twilio, and World Sensing demonstrated an expanded vision of a "smart home" aimed at creating a safer home environment for vulnerable citizens, such as the elderly. The technology allows the house itself, using sensors and receiving technology, to know when a person has fallen, for example, and to detect dead batteries in smoke alarms, triggering a signal to replace them.

In another demonstration, Smart Shape Technology, a team comprised of Imaginestics, Digital Manufacturing and Design Innovation Institute, Rapid Direction, and the University of Dayton Research Institute showed how a mobile device can take a picture of a broken component in a larger product, such as a specific kind of valve in a broken faucet, then match that picture in a "shape search" against the inventory available at local retailers. If the part can't be found locally, the next step could be to send the image to a 3D printing shop to create the part for the consumer.

>with the car able to communicate directly to a pedestrian's smartphone, improving safety.

Couldn't the car (if not the driver) communiate directly with the pedestrian by honking? All these smart products are making us dumb.
Reply  |  Post Message  |  Messages List  |  Start a Board
Editors' Choice
Hot Topics