Facebook's Timeline Soon Will Be Mandatory

Your Facebook page as you know it will be going away, to be replaced by Timeline, a richer and more complete look at your status over time.
Dino Londis
Contributor
January 27, 2012

Facebook announced Tuesday that it is switching all users to Timeline "over the next few weeks." Timeline is Facebook's new interface to better display all of a user's posting and pictures that are mostly sitting dormant on its servers.

Among other things, Timeline has a slider bar that starts with the day you created the account and runs all the way up to today. The timestamp of a post puts the events in chronological order. Users are also prompted to insert events such as graduations, car purchases, and vacations to better tell their story. Other apps will allow them to post on topics such as how many miles they've run that day, the movies they quote, and the songs they have on repeat.

When you get Timeline, you'll have seven days to preview your data and hide specific items. After the seventh day you can still hide posts and photos, but others might have seen and copied them by then. Timeline doesn't expose anything that wasn't on your Facebook page already, but it might bring to the forefront items that were previously buried.

Soon users who are not using Timeline will get an announcement at the top of their Facebook homepage informing them that they are being converted to the new interface. If you want to do it sooner, you can visit Introducing Timeline and click on "Get Timeline." 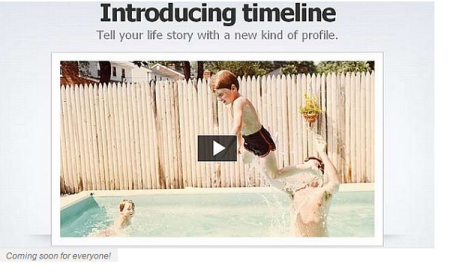 No doubt this will cause problems for some Facebook users. For example, college students who began posting more responsibly in hopes of impressing perspective employers will now need to revisit their entire history. Even where a user's photos and comments were thoughtfully posted, incriminating data could come in other forms such as check-ins. An automated check-in via your iPhone might contradict the story you gave to HR when you called in sick. Try explaining how you got a badge at Starbucks, when you should have been home with pneumonia. HR might perform a comparison of your Timeline to days you called in sick. With all that searchable history, HR now has a more compelling reason to visit your Facebook page and, while it's there, it might discover things about you that you thought were long forgotten.