Apple iOS 7: Visual Tour
(click image for larger view)
Shortly after Apple pushed its iOS 7 update live on Wednesday, Facebook announced an iOS 7 update of its own. The changes coming to the new version of Facebook's mobile app focus on improving its design and navigation.

Users will notice that the icons for friend requests, messages and notifications that were traditionally found at the top of the app are no longer there. Instead, Facebook has added a new menu bar that runs along the bottom of the screen that makes it easier to switch between five options -- the news feed, your friend requests, messages, notifications and more -- while you're browsing your news feed. The "More" button sends you to the main menu, where you can access the rest of Facebook's sections, such as events, pages, photos and other options.

In addition, Facebook also made improvements to the aesthetics of features such as notifications. Before, tapping the notifications button at the top of the app opened the list in a pop-up bubble. Now when you select notifications from the menu at the bottom, they load in a full screen as a scrollable list that displays similarly to the news feed. The social network has also added a translucent navigation bar at the top of that app that lets you view content underneath as you scroll through posts and photos.

The changes to Facebook's app are intended to place more of an emphasis on content, a spokesperson for Facebook said. This emphasis was also front-and-center in developing the new news feed that Facebook announced in March. The news feed redesigns how you navigate content, with individual feeds that feature photos, music, friends and content only from Pages that you follow. This new design is still slowly rolling out to users.

While Facebook added the tabbed design in its latest version, Twitter reportedly plans to get rid of that feature in its app. The two social networks have increasingly gone head to head in pushing out new features and updates. Twitter's iOS 7 update, however, still includes the bottom row of buttons. 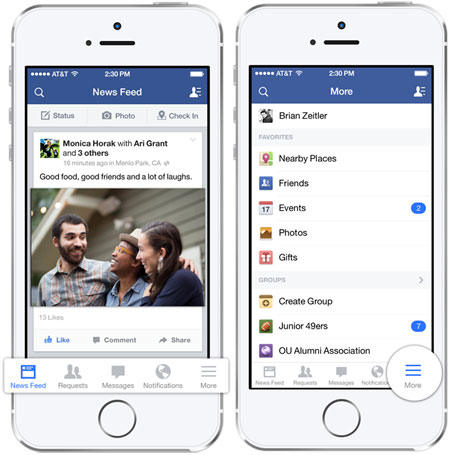 The new iOS app is also available to users with iOS 5 or iOS 6, though there are small differences in these versions. Facebook's new iOS app is available for iPhones only and can be downloaded from the iTunes store now. Facebook said it is not bringing these interface changes to the iPad app just yet.

Facebook's version 6.5 of its mobile app is also now available in Czech, Finnish, Polish, Swedish and traditional Chinese, too, the company said.