SEARCH
A minimum of 3 characters are required to be typed in the search bar in order to perform a search.
Announcements
Report
How does your salary stack up? 2022 IT Salary Survey Results Revealed
Event
Learn about the latest technologies that are revolutionizing identity governance and access management
PreviousNext
Government
2 min read
News 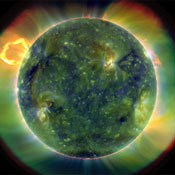 The Visible Sun
NASA's recently launched Solar Dynamics Observatory is returning the first, ultra-high resolution images of solar gases and other materials emanating from the sun.

The images prove that the sun is teeming with activity and is constantly changing.

"These initial images show a dynamic sun that I had never seen in more than 40 years of solar research," said Richard Fisher, director of the Heliophysics Division at NASA headquarters, in Washington, D.C.

"SDO will change our understanding of our sun and its processes, which affect our lives and society. The mission will have a huge impact on science, similar to the impact of the Hubble Space Telescope on modern Astrophysics," said Fisher.

SDO's imaging equipment is designed to capture pictures that are ten times the quality of those displayed by a High Definition television set.

NASA launched the SDO on Feb. 11. The spacecraft's five-year mission will see it probe the sun's magnetic field and capture data that scientists will employ in their efforts to gain greater insights into the sun's impact on Earth's atmospheric chemistry and climate.

The ship will also examine sun's magnetic field and the phenomena it generates, such as solar winds and flares, and coronal mass ejections.

SDO was built at, and is managed from, NASA's Goddard Space Flight Center in Greenbelt, Md.

"I'm so proud of our brilliant workforce at Goddard, which is rewriting science textbooks once again," said Senator Barbara Mikulski (D-Md), in a statement.

"This time Goddard is shedding new light on our closest star, the sun, discovering new information about powerful solar flares that affect us here on Earth," said Mikulski.

Solar flares have been known to knock out communications satellites and interfere with power grids. NASA is hoping to develop early warning systems that could help utilities and telecommunications companies plan for such events.