Gaps In Federal IT Strategy

With the Obama administration in its second year, the IT strategy of federal CIO Vivek Kundra and federal CTO Aneesh Chopra has moved into full-scale implementation. Yet, while there are many signs of progress, most of the work involved still lies ahead.

To assess how its going, InformationWeek Government surveyed 154 federal IT professionals on their progress meeting administration objectives. Our Government IT Priorities survey, conducted in July, finds that cybersecurity and security are by far their leading areas of focus.

The survey, however, reveals a gap between the administration's centralized IT policy and implementation at the agency level. Agencies are driven more by internal agendas than by Obama administration policy.

The Office of Management and Budget's Data Center Consolidation Initiative aims for cost savings, reduced energy consumption, and improved space utilization, but only 27% of respondents feel that data center consolidation is "extremely important." Nevertheless, it's one area that the administration has impacted IT priorities, with 25% indicating that administration guidance prompted an assessment of their data center environments.

It should be noted that only 6% of respondents to our survey consider poor project management a barrier to effective IT project execution. Instead, respondents point to lack of budget (36%) and conflicting or lack of requirements and priorities (24%) as undermining such efforts.

What drives an agency's IT priorities: The president? Congress? Agency leadership? A sizeable majority of respondents to our survey, 81%, point to agency initiatives as a primary driver of IT priorities. Legislative requirements are mentioned second, by 44%, while OMB (where federal CIO Kundra works) ranks third.

What seems to be missing is a mechanism for converting central policy into execution within the federal bureaucracy. While OMB mandates around data center consolidation and open government show that policy can lead to desired outcomes, the fact remains that the federal government is comprised of independent agencies with leadership, spending power, and priorities that span administrations.

Federal IT leaders are heading in the right direction, but they must move forward more decisively to get results that align with national priorities. 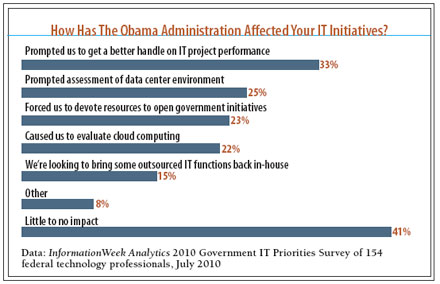