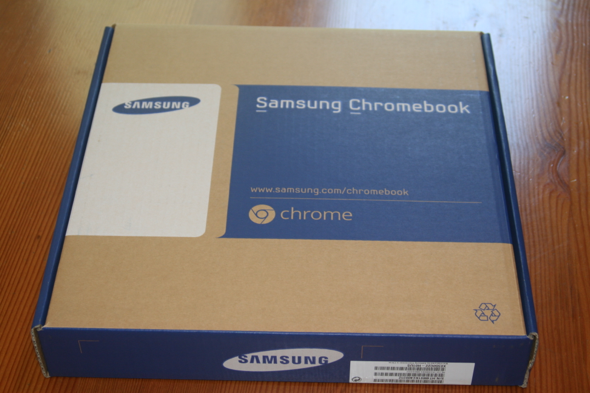 Samsung's new Chromebook Series 5 550, and its screenless, keyboardless sibling, the Chromebox, represent a substantial improvement over the company's first generation hardware, thanks in large part to changes in Google's Chrome OS.

Samsung has done its part by using a fast Intel Core processor to replace the less capable Intel Atom processor in first-generation Chromebooks and by introducing the Chromebox ($329), a small Chrome OS computer without screen or peripherals for businesses and schools. Google, meanwhile, has revised the Chrome OS interface and has taken advantage of the speedier silicon by implementing hardware acceleration, which makes the new UI much more responsive.

The Chromebook Series 5 550 ($449/$549 w/3G) sports a more subdued look than its predecessor. It weighs about the same and is still made of plastic rather than metal.

Within six weeks, Chromebooks will be much better suited to mobile usage because they will be able to operate without a network connection. Google says it will soon add offline editing support to Google Docs. Once that happens, it will be possible to use a Chromebook at conferences or on the road without fear that a network signal loss could render the device inoperable.

While Chrome OS is still a browser-centric operating system, it's starting to feel less alien. Older versions of Chrome OS keep the browser window locked in place. With Chrome 19, multiple browser windows can be opened and can be repositioned, revealing a desktop behind them. While the desktop is just a visual metaphor to help with file organization and navigation, it's a powerful one because it's all most computer users have ever known.

Google is also in the process of building Google Drive into Chrome OS. When Google Drive integration reaches stable release in the next few weeks, Chromebooks will feel even more like every other laptop. That doesn't necessarily undermine Google's aim to make Chrome OS devices less like the typically computer, which is to say easier to maintain, less vulnerable to security problems, and faster to start up.

Dig into our slides to see the current state of Chrome OS hardware.