SEARCH
A minimum of 3 characters are required to be typed in the search bar in order to perform a search.
Announcements
Report
IT Enterprise Dashboard: This interactive data tool enables access to global research on IT budgets, business challenges
Event
Get in-depth insights & analysis from experts on all aspects of communications, collaboration, & networking technologies
Event
Data Center World is the leading global conference for data center facilities and IT infrastructure professionals.
Report
Find out what you need to know so that you can plan your next career steps and maximize your salary.
PreviousNext
Government
News 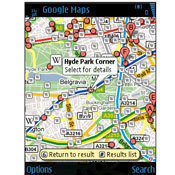 Google Maps for Mobile 3.2
Google is bringing features from the desktop version of Google Maps to its mobile apps for Symbian and Windows Mobile smartphones.

The 3.2 version of Google Maps for mobile enables users to layer multiple types of data on the screen at the same time. This can include traffic reports, public transportation directions, local search results, and the location of friends using Google's Latitude service.

Additionally, consumers can create personalized map mashups on the go with the My Maps feature. Mobile users can also turn on a Wikipedia layer for information on nearby monuments and venues.

The company also improved the way users can search for location-relevant results. Under the "Search" tab, there's a link to browse popular categories, and Google said this can help mobile users avoid typing. The latest version of Google Maps can be downloaded directly to handsets from m.google.com/maps.

Symbian's YouTube app also was updated, and the latest version is now compatible with Series 60 Fifth Edition handsets like the N97 and the 5800 XpressMusic. The latest version doesn't offer major changes, but it is expected to improve playback and add functions.

While these operating systems are rivals to the Google-backed Android OS, the search giant benefits nearly any time consumers go online with handsets. Google has multiple apps for BlackBerry, Java ME, Symbian, and Windows Mobile, and it sometimes will bring new features like voice-driven search to the iPhone before it hits Android. Google CEO Eric Schmidt has said he expects mobile Web advertisements will eventually generate more revenue than ads on the normal Web.


For enterprises, keeping mobile devices functioning without interruption and giving customers the service they expect are paramount. InformationWeek has published five important practices on this topic. Download the report here (registration required).