10 Best Business Tools In Google+
(click image for larger view and for slideshow)
Google's deliberately mysterious Niantic Project has been revealed: It's an augmented reality multiplayer game called Ingress, presently available for Android devices, with an iOS version in the works.

Google doesn't have the best track record as a producer of games: Its last game-like project, a colorful chat environment called Lively, failed. But Ingress looks more promising, thanks largely to the masterful viral marketing campaign that has been promoting the project for several months.

Indeed, the marketing for Ingress -- a slow tease of hints to build interest -- appears to have been so successful that more than 200 people who have downloaded the game from Google Play have given it a five-star review before receiving the activation code necessary to actually play it.

The game is presently in closed beta and would-be players must request an activation code from Google.

Ingress is the second project to emerge from Niantic Labs, a Google-backed mobile app startup run by John Hanke, VP of product, who joined Google in 2004 through its acquisition of Keyhole, the source of the technology behind Google Earth. The first project was FieldTrip, a social app that provides information to mobile users about their surroundings.

"We live in a world of abundant information and ubiquitous computing -- why not play in it?" said Hanke in an emailed statement. "For the first time, the world, not the screen, can become the basis for a mobile game -- it's a controller in the palm of your hand."

This isn't quite the first time the world has been used as the basis for a mobile game. Ingress joins a growing list of augmented reality games, which rely on real-world imagery and locations as the foundation for an entertainment framework. In Ingress, game play revolves around visiting locations to collect "exotic matter" and then traveling to different locations, or "portals," to receive further game-oriented missions. Players can join one of two teams and cooperation is essential. No points will be given for dodging traffic while phone-focused; survival is its own reward.

There is a problem with such games, however: It's often really easy to cheat, because it's easy to spoof one's location. There's an app for that -- more than one, in fact. Cheating in online multiplayer games is quite common. But beyond the hack-the-system mentality of many online gamers, there's an extra incentive to cheat in a location-based game: Traveling around the real world can be time-consuming and costly.

Location-spoofing was a problem in a remarkably similar location-based multiplayer game, Shadow Cities.

But Ville Vesterinen, co-founder and CEO of Shadow Cities maker Grey Area Labs, said in an email, "On the location spoofing issue, there are the few players who attempt location spoofing, but we have build a system to catch them if they try that in Shadow Cities. Thus, it has not been an issue for us after we built a system to see if such behavior happens and let the players know about it so they won't even try it out."

Google insists it has adequate safeguards in place to prevent location spoofing, a company spokeswoman said. Even so, expect some abuse of the system.

Ingress doesn't yet have a business model, but if the game proves to be successful, Google is planning to explore revenue opportunities with partners. The game could one day be adapted to work with Google's Project Glass -- what better way to play an augmented reality game than through augmented reality glasses? 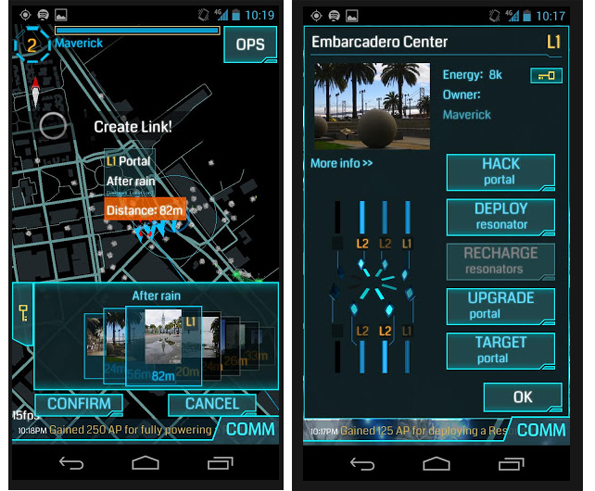