The latest round of testing for Google's self-driving car will bring the company's vehicles to the streets of Austin, the Texas capital. Mayor Steve Adler announced the agreement between the search engine giant and the city over this past weekend.

"We spent Saturday at +Thinkery, a children's museum in Austin, and couldn't have had more fun! We brought along our prototype vehicle and Lexus SUV, and hung out to answer questions about our project and learn what Austinites think of it so far," according to Google's Self-Driving Car Project blog in a post written on Monday, Aug. 31.

In the next few weeks, Google's prototype vehicles will be out navigating the same area north and northeast of downtown where their Lexus vehicles have been driving by themselves for the last couple of months.

One of the company's Lexus SUVs is there with safety drivers aboard, driving a few square miles around northern Austin.

The Google blog post also noted that both vehicles will continue to have test drivers aboard, and entreated the city's residents to continue sharing their thoughts with the company.

The decision to mention that drivers will remain on board may have been an effort to reassure skeptics with additional safety precautions. 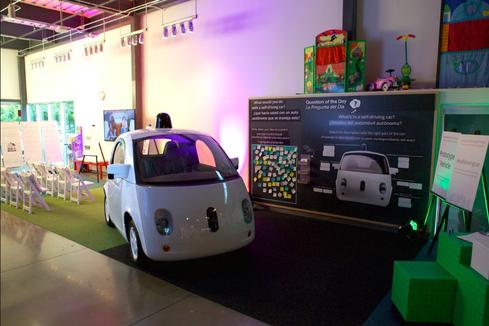 The company's principal engineer and software lead for Google's self-driving cars wrote a blog post detailing the most recent collision, which occurred during the evening rush hour of July 1 outside Google's corporate headquarters in Mountain View, Calif.

During the Q&A at the children's museum it was also revealed that the self-driving car does not have wipers on the windshield, but instead over the headlights, which serve as the eyes of the car.

The headlights have sensors designed to detect objects as far as two football fields away in all directions, including pedestrians, cyclists, and vehicles -- even plastic shopping bags or birds fluttering past. The software processes all the information to help the car safely navigate the road, of course neither getting tired nor distracted.

Google also said two of the most popular answers residents had to the question of what would they do in a car if they didn't have to drive were: eating tacos and reading.

While Google may be racking up an impressive list of mileage stats, so far one other company in the nascent self-driving car market has achieved an attention-getting milestone.

[Read about why Gartner says IT should pay attention to autonomous cars.]

Then there is the mysterious Project Titan from Apple, which may or may not be the company's effort at a driverless car. So far it seems that Apple is close to testing its concept. The company has, for instance, started to hire more engineers with expertise in autonomous vehicles.

Nathan Eddy is a freelance writer for InformationWeek. He has written for Popular Mechanics, Sales & Marketing Management Magazine, FierceMarkets, and CRN, among others. In 2012 he made his first documentary film, The Absent Column. He currently lives in Berlin. View Full Bio
We welcome your comments on this topic on our social media channels, or [contact us directly] with questions about the site.
Comment  |
Email This  |
Print  |
RSS
More Insights
Webcasts
How to Effectively Analyze Security Data
Malicious Insiders: Real Defense for Real Business
More Webcasts
White Papers
5 Reasons You Need Near Real-Time Threat Data
Best Practices for the Three Phases of Azure Migration
More White Papers
Reports
Endpoint Security 2020: The Resurgence of EPP and the Manifest Destiny of EDR
AI-Augmented Attacks and the Battle of the Algorithms
More Reports

A self-driving truck makes more sense than a self-driving car. Trucks are driven on long-hauls inter-state high ways with less surprises on the road and no pedestrians. Fleet & Logistic companies are better candidates for being early adopters of this technology than consumers. The safety apprehensios, the business case, the savings all are GREEN. As a citizen occassionally driving on highway, I would be more comfortable if I am sharing the road with a self-driven truck than a human driver who may be on the phone or just tired from last six hours of driving!
Reply  |  Post Message  |  Messages List  |  Start a Board
Editors' Choice
Hot Topics