How the SF Giants Perfected BYOD and Their Game

San Francisco Giants CIO Bill Schlough and AT&T work hard so you can BYOD to the ball park. Watch our 12 minute mini-documentary of Matt Cain's perfect game and the story it inspired of how technology is changing the game of baseball.
Boonsri Dickinson
Associate Editor of BYTE
July 06, 2012

In the history of Major League Baseball, there have been only 22 perfect games, and Matt Cain now has one of them.

But another record was broken: an IT record. Fans wanted to share the perfect game with friends. And the data showed that they shared more than ever that night.

San Francisco Giants Chief Information Officer Bill Schlough told BYTE: "...at a typical game, fans download data over our Wi-Fi network at a rate roughly double the pace of uploads. At the perfect game, we set a new record for total data uploaded via Wi-Fi at AT&T Park (>70 GB). As far as we know, this was the largest volume of data uploaded via Wi-Fi at a sporting event in history."

On June 13, 2012, I was standing behind home plate, filming the SF Giants, when Matt Cain threw his last pitch against the Houston Astros.

Click here for an MP3 audio file (22MB) of this video. (Right-click, Save As to save)

I pulled out my iPhone 4S and immediately uploaded the footage of the last play to Facebook so all my friends would know that I was there. Tens of thousands of fans did the same thing. Amazingly, the Giants IT team and their partners created a network that could handle such a giant traffic load.

Bill, The Only IT Guy With A World Series Ring?

Schlough just looks so freaking happy. That was his reaction at the end of the historic game.

But could you blame him? After all, Schlough has been in charge of the technology at the ballpark for 14 years.

Most of the night was spent behind the scenes with Schlough, who gave me a tour of the technology that powers AT&T Park. The Giants have put the enabling technology in place for coaches, players, Giants team at large, and fans to have greater engagement. That means a better fan experience, one they can share to their social networks. And for the Giants, it means engaged fans. It also means that the Giants brand is being virally spread in real-time.

I arrived at AT&T Park at 4 PM to interview the Schlough and get a personal tour of what the tech department does to keep the super-connected stadium running. I got there early, before all tens of thousands of fans showed up to investigate how the technology works, find out what a sports IT guy does, and how fans actually use the technology.

How The Players Use Technology

Players can't use their phones during the game. But after the game, they can do much more than just sign their names on baseballs. They can tweet their fans and engage with them on a personal level. I spoke to some of the more social media savvy players.

Right fielder Gregor Blanco, who made an epic catch during the seventh-inning, and is credited with saving the perfect game, loves his BlackBerry phone, of all things.

Gregor Blanco
Moving from Caracas, Venezuela has been tough, but Blanco uses his BlackBerry to stay in touch with his family. "I think [mobile phones are] just great. I can talk to my fans through Twitter and I can talk to my family back home using the BlackBerry. It's an unbelievable technology, and one of the best things the world has created," Blanco said, standing on the sideline during batting practice.

57-year-old manager Bruce Bochy, who was a baseball player in his younger years, is as involved in tech as many of the players. "I can't use the cell phone during the game and they are not allowed in the dugout or bullpens. What we do have, are iPads and computers. We get all the advanced reports all the videos and all the stats. I can watch anybody I want in professional ball and some colleges, by just turning on my computer and putting their name in there. More importantly when we are playing another team, we have all of this information available. Sometimes I need my own IT guy to get me straightened out," Bochy said about technology use in the game.

Like Blanco, Angel Pagan, who plays in center field, said he uses his iPhone to talk to his wife and kids. However, shortstop Brandon Crawford has 27,000 followers on Twitter and uses his phone to keep in touch with his fans.

Taking a break from speaking to his family, SF Giants pitcher Jeremy Affeldt, who has 28,000 followers, said he also loves using Twitter to communicate with fans.

How The Fans Use The Internet

Later, when we interviewed the fans, many of them had their phones and their iPads -- expecting to be able to connect to the Internet.

Schlough estimates that each fan brings at least one device with them to the game. And at any one time, 25 percent of fans hook up to the Wi-Fi.


By moving users from cellular to Wi-Fi at AT&T Park, AT&T is performing Mobile Data Offloading. Click here to read more about this emerging technology trend and the vendors, such as Cisco, Enterasys and Ruckus Networks, involved in it..

In 2004, AT&T Park became first wirelessly-connected stadium in Major League Baseball. With the proliferation of smartphones and tablets, the demand for Wi-Fi has increased. Consider the chart below, which shows the percentage of Giants fans that access the Wi-Fi network at a given game. 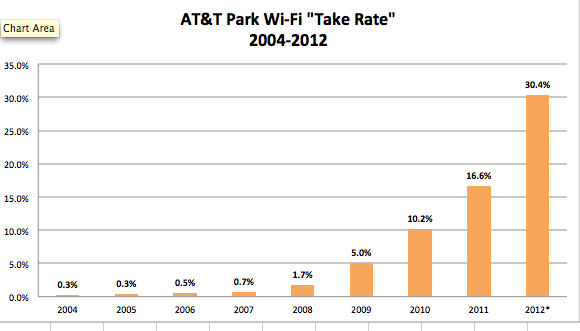 This year, 30.4% of Giants fans bring a smartphone, laptop or other Wi-Fi enabled mobile device and connect to the AT&T Wi-Fi network at a typical game. It's safe to assume that there are other fans who connect to cellular networks, not Wi-Fi, but the Giants can't track this.

A Cisco WiFi access point at AT&T Park
To find out what makes it work, we toured the IT center. There 334 Wi-Fi access points around the entire facility, and it's those devices that create one of the largest Wi-Fi networks in professional sports. The Wi-Fi isn't just used by fans to upload content to social media, it's used by the media to broadcast footage of the game, the concession stands to take payments, the digital menu boards to stream content and the ticket-takers to scan tickets.

"The biggest technical challenge we face is how to design the network to service our fans' insatiable (and ever increasing) appetite for high-bandwidth mobile content, primarily the download/upload of video and photos," Schlough said.

The night wouldn't have been the same without my iPhone 4S, capturing Schlough screaming after the last play. Thousands of fans did the same thing and AT&T Park can handle it. 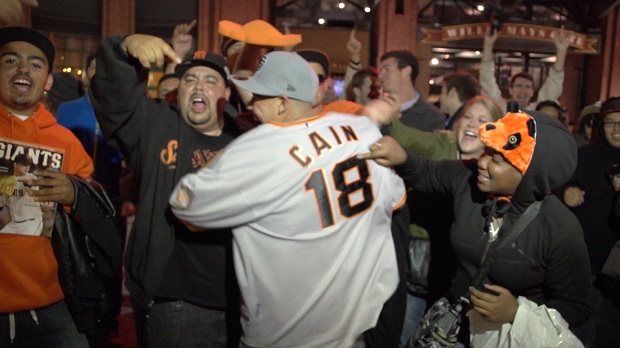