The ski resort is using mobile and web apps with social media links to let people share their mountain experience. One in a series of profiles of InformationWeek 500 innovators.
Chris Murphy
Editor, InformationWeek
September 07, 2011
With the launch of EpicMix, a Web and smartphone app for skiers and snowboarders, IT will never be the same at Vail Resorts, which runs four ski resorts in Colorado and two in California.

When EpicMix was launched in 2010, it was the first app of its kind in the ski industry, letting guests track the vertical feet they ski or ride, collect digital pins for feats such as taking every lift at a resort, and boast of their feats on Facebook. And they can share their whereabouts on the mountain with their Facebook friends.

Building it meant connecting the mountain to the digital world, which Vail's IT team did by putting RFID readers at every lift line so the resort could read guests' tags. That data stream was integrated with Vail's customer database, which in turn linked to the Web and smartphone interface. Facebook integration was a final step.

All of those components made EpicMix "probably the most complex IT project we've undertaken," says CIO Robert Urwiler. But complexity isn't what's changing IT at Vail. It's EpicMix, which forces the IT team to focus on the customer experience more than internal needs. This changes how the resort's IT pros regard their jobs, Urwiler says, since they get both the joy and anguish of unvarnished customer feedback.

"This is much closer to a commercial software endeavor than an enterprise IT project," says Urwiler, who worked as CIO at Macromedia before joining Vail in 2006. "It will end up over time attracting a different kind of person to the IT role."

For the initial version of EpicMix, the resort company's first mobile app, Vail leaned heavily on contractors. With big plans for version 2 in the coming ski season, Urwiler realized he needs to build and maintain the app in-house, so he added a small mobile development team.

Building customer-facing apps also ramps up the deadline intensity. A ski resort has a limited season, so if the app isn't ready on opening day, the clock starts ticking: For EpicMix, the RFID data-gathering system worked from day one of the 2010-2011 season. But it was several weeks into the season before the Web app was ready to let people interact with the data, and the mobile app came several weeks after that. The development teams had to put in some 24-hour days to get the apps out. 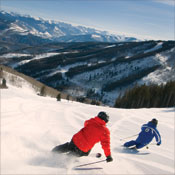 IT is deeply integrated into the guest experience at Vail's resorts. Season tickets and loyalty cards are RFID-enabled, letting staff at lift lines use handheld scanners to check guests' passes without them having to take them out of their pockets.

Those RFID-enabled tags were a key part of making EpicMix work--people needed one of those cards to provide the raw data to the app. EpicMix planners knew they wanted a passive system that could collect data as guests passed by, not something people had to remember to scan. "What we didn't want was to create an obstruction," Urwiler says.

Facebook presents another challenge because the rules for what companies and app developers can do change often as the platform evolves.

Did EpicMix pay off? Urwiler can't point to a specific number of people who skied or rode at Vail's resorts last season because of the app. However, 100,000 people activated the app, which is 15% of all season ticket holders and loyalty card members. Forty-five percent made their accounts visible on Facebook, which led to 35 million impressions on the social network. "It turns these 100,000 people into brand activists," Urwiler says. "You have to earn brand activists."

More than anything, Urwiler sees technology as part of Vail's mission: creating the "experience of a lifetime" for guests. Vail needs to differentiate its resorts from the competition, and while nothing beats great snow and sunshine, the digital element will increasingly be part of how guests judge their visits--and share those judgments with friends.