Former eBay chief tasked with ending the turmoil at legendary Silicon Valley computer giant.
Paul McDougall
Editor At Large, InformationWeek
September 22, 2011
Hewlett-Packard on Thursday fired Leo Apotheker as CEO and replaced him with former eBay chief and current HP board member Meg Whitman, in an effort to stabilize a company that has been through a series of volatile course changes during the past several quarters.

"I am honored and excited to lead HP," said Whitman, in a statement released after the close of markets. "I believe HP matters--it matters to Silicon Valley, California, the country, and the world."

HP also named tech industry veteran Ray Lane as executive board chairman. Lane had been serving as a non-executive board member at the Palo Alto-based computer maker. "We are fortunate to have someone of Meg Whitman’s caliber and experience step up to lead HP," said Lane, also in a statement.

Whitman led online auction site eBay from 1998 to 2007. She is credited with turning what was a small startup into one of the world's most successful e-commerce sites and widely recognized consumer brands. She unsuccessfully ran in California’s gubernatorial race last year.

[ See what IT pros had to say about HP's strategy shift in this exclusive InformationWeek survey. ]

Whitman takes the helm at HP at a time that many consider to be the nadir of the company's 72-year history. Her appointment marks HP's second CEO transition in just over 10 months. In November, 2010, Apotheker arrived from SAP to replace former CEO Mark Hurd, who stepped down amid allegations he had an improper relationship with a female consultant. Hurd then bolted to rival Oracle.

It didn't take long for doubts about Apotheker to emerge.

In February, he irked longtime partner Microsoft, by publicly stating that he planned to put HP's WebOS operating system on every PC to run alongside Windows. He also said HP would use WebOS exclusively on its consumer tablets. Just six months later, in an about face, Apotheker said HP would look to spin off its $40 billion PC business, and scrap future plans to make its own WebOS tablets.

Investors and customer grew impatient with the mixed message coming from HP under Apotheker's watch. "HP's strong customer brand is being damaged by the uncertainty of the Board and repeated CEO turmoil. The company is in a difficult strategic position," said Forrester analyst Frank Gillett. 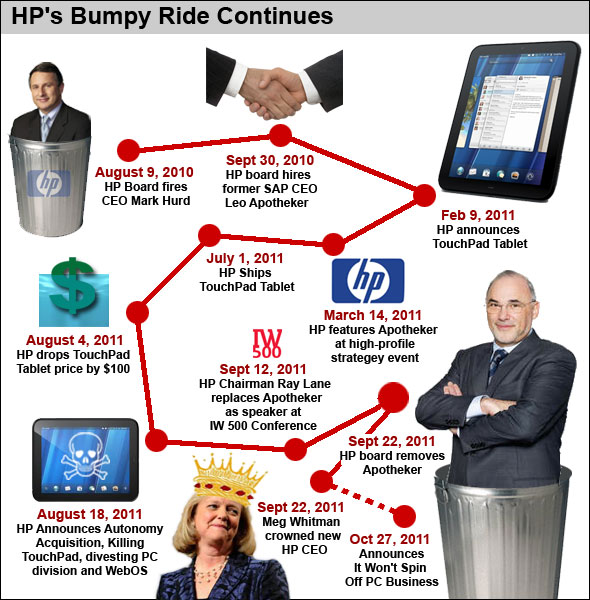 Whether Whitman will fare any better is an open question. She’s known as a terrific brand builder in the consumer market, but has little experience in the enterprise tech market, a key growth area for HP that accounted for 45% of the company’s total revenue last year.

Lane said he's confident in the board’s choice. "We are at a critical moment and we need renewed leadership to successfully implement our strategy and take advantage of the market opportunities ahead. Meg is a technology visionary with a proven track record of execution. She is a strong communicator who is customer focused with deep leadership capabilities," said Lane.

HP shares were down more than 4% in after-hours trading on the news.

Here's what Lane had to say about HP's future strategy at the recent InformationWeek 500 conference: