SEARCH
A minimum of 3 characters are required to be typed in the search bar in order to perform a search.
Announcements
Report
How does your salary stack up? 2022 IT Salary Survey Results Revealed
Event
Learn about the latest technologies that are revolutionizing identity governance and access management
PreviousNext
Government
6 min read
article

Hewlett-Packard's board is weighing giving CEO Leo Apotheker the boot after just 10 months, reports say.
Fritz Nelson
Vice President, Editorial Director InformationWeek Business Technology Network
September 21, 2011
Published reports say that Hewlett-Packard’s board is weighing the ouster of CEO Leo Apotheker and deciding on a replacement, with former eBay CEO Meg Whitman as the top candidate. Despite Apotheker's short, 10-month stint running HP, if these reports are true, this has been a long time coming. HP would not comment on the matter.

Less than two weeks ago, on Friday, Sept. 9, Apotheker called me personally to say he was pulling out of our scheduled live interview at the following Monday's InformationWeek 500 Conference in Southern California. He told me he couldn't divulge the reason but that if I knew the reason, I would understand. I suspected at first that he was resigning, but then he showed up to speak at a Deutsche Bank technology conference on Sept 13.

[See what IT pros had to say in InformationWeek's exclusive survey on HP's recent strategy shift.]

That same week, HP Chairman Ray Lane showed at our conference in Apotheker's place, and he didn't mention Apotheker once during his 45-minute Q&A with me and our audience. Here's a little about what Lane said at our conference, followed by a video of the entire interview:

At the InformationWeek 500 Conference, our annual gathering of CIOs, a jam-packed ballroom watched and listened as HP's chairman, Ray Lane, not only spelled out HP's vision, including the reason it's looking into spinning out its PC division, killing off its mobile hardware, and acquiring Autonomy. It was the clearest and cleanest (and perhaps only) explanation most of us had heard from HP in the past month. But Lane revealed a few other interesting tidbits that stick with me still.

First, he bothered to come. Here's the chairman of HP, with plenty of other things to do, including his job as a managing partner at venture capital firm Kleiner Perkins Caufield & Byers, and yet he realized that HP had botched communications with customers, and he came to clear things up. Meantime, Apotheker, the company's CEO, pulled out of the same commitment at the last minute, yet managed to show up at an investor meeting the following day. In talking with CIOs throughout the conference, it was clear that Lane's symbolic gesture mattered to them.

But Lane wasn't just some silver-tongued suit on stage. He clearly knew HP's business exceedingly well, and he could talk about everything from the company's strategy to its products. At one point, I teased Shane Robison, HP's chief strategy and technical officer, who had accompanied Lane, that the chairman might be gunning for his job. Lane also knows HP's customers. When I asked him what the single biggest CIO challenge is, he said: finding, keeping, and managing talent. Bingo.

When we talked about our conference theme, "The Need for Speed," Lane talked about how customers need to make decisions quickly and move on, harkening back to his days as president of Oracle, when customers would take months to decide between Oracle and SAP. On stage at the InformationWeek Conference, Lane ventured that ultimately it didn't make much difference which enterprise software vendor a customer chose.

It struck me as particularly odd that someone like Apotheker, a former salesman, wouldn't relish the chance to get in front of an audience of top customers, even if they were a little confused and upset by HP's recent strategy alterations. The chance to clarify the new strategy in a roomful of CIOs seems like the kind of thing you wouldn't blow off, especially as Apotheker chose to face angry investors the following day.

In truth, HP has little choice but to consider putting a close to the 10-month Apotheker era. He was a surprise choice, having been bounced from SAP, where he was a solo CEO for only seven months. He started at HP amid the cloud of a high-profile lawsuit in which Oracle charged his former employer with stealing Oracle's intellectual property--Oracle was trying to subpeona Apotheker, and the joke in Silicon Valley was "Where's Leo?"

On March 14, HP rolled out Apotheker to wax eloquent on the company's vision. It invited press and investors to hear the new CEO talk about cloud, big data--and mobile, the centerpiece of which was WebOS, acquired in the Palm deal a year earlier. The speeches from Apotheker and other HP execs were met with a tepid response. Mostly customers went about their business, continuing to buy servers and storage and networking and some software from HP.

Then, on Aug. 18, news leaked that HP was looking to divest its PC business, kill its mobile hardware business, perhaps sell off WebOS (or perhaps not,) and acquire Autonomy for more than 10 times its revenue. Later in the day, HP announced all of that to be official during its financials call (where it also downgraded its earnings guidance for the year). HP's stock price fell with a thud, draining more than 20% of the company's value within a day.

And then, a week ago Friday, I found myself on the phone with the beleaguered CEO as he informed me he wouldn't be honoring his commitment to speak at our InformationWeek 500 Conference. I struggled to understand why he would put me, and himself, in this position at the last possible moment. Did he really not care about HP's customers? I had sent to him the results of a survey of our readership taken after Aug. 18, asking customers what they thought of the company, and I kept thinking that maybe he thought it would be too hostile an audience. It wasn't. It just wanted answers.

And Ray Lane provided them. Even if many in the audience were skeptical about HP's revised strategy, they at least understood where the company was coming from.

If HP makes a move, they must find a first-rate CEO who will calm the markets and settle an anxious employee base. The former eBay chief may have plenty of time on her hands and is reported to be the likely replacement. Lane probably has too much on his plate at Kleiner Perkins and elsewhere to consider taking the job. More Ray Lane-style plain talk is what HP needs. 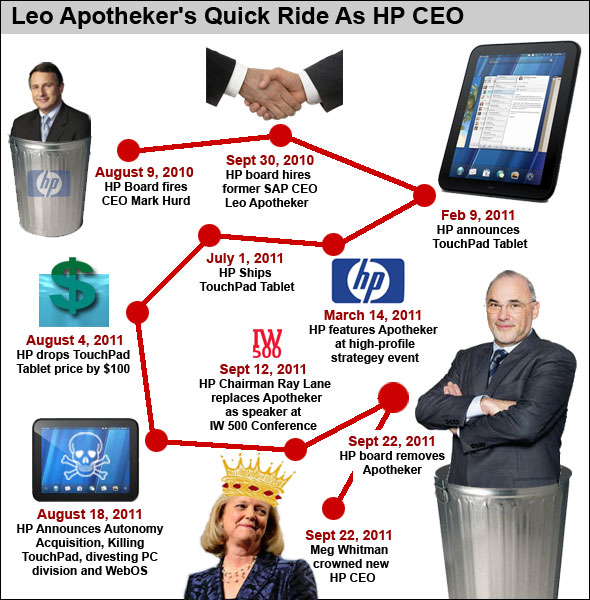