More than 30% of users in an online forum poll indicated they have cracks near the power button on the handset that was released by Sprint in June.
Esther Shein
Contributor
August 16, 2010 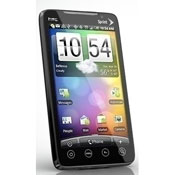 (click image for larger view)
Sprint HTC EVO 4G Smartphone
HTC EVO 4G users have been reporting problems with a crack near the power button since the device was released by Sprint in June. Some 31% (127) visitors to a poll on the XDA Developers forum responded "yes" when asked if their EVO 4G is cracked at the power button. Another 68.80% (280) said they do not have the problem.

However, users who have found a crack are responding in various forums that they have not done anything to cause the problem, such as dropping the phone or hitting it against something. When they report the issue to local stores, responses have been varied. Some users said they are being told the crack is not a known issue at this time and so they cannot receive a free replacement; others said they were offered a refurbished model if they were within 30 days of purchasing the phone.

As early as mid June, users started complaining about the issue in forums. One visitor to a Sprint forum wrote, "I suggest if anyone else has this issue to call in and report it, at least that way we can have Sprint know and record it on their system as a known issue." Another wrote in an HTC forum, "Everyone do yourself [sic] a favor and look at your power button. See anything out of the ordinary? Like a crack in the housing around the button." Another visitor to the HTC forum wrote that even though the device has been kept in a case, the problem still occurred. "…Sprint claims that HTC has not said this is an official manufacturing defect so they refuse [to] exchange my phone for a non-cracked version."

Sprint launched the EVO 4G on June 4 for $199 and said it set a single-day sales record, although the company later acknowledged it overestimated how many EVO 4G units it actually sold. Since its debut, it has been a strong competitor to Apple's iPhone.