In Focus: Content Management Heats Up, Imaging Shifts Toward SMBs

Companies of almost all sizes plan to increase spending on content and document management in 2006, while more small and midsize firms expect to increase spending on imaging. These are just two of the conclusions from the recently completed "2006 Intelligent Enterprise Strategic Management Survey," a massive Web-based survey that drew more than 1,131 readers of Intelligent Enterprise magazine and its related Web sites. 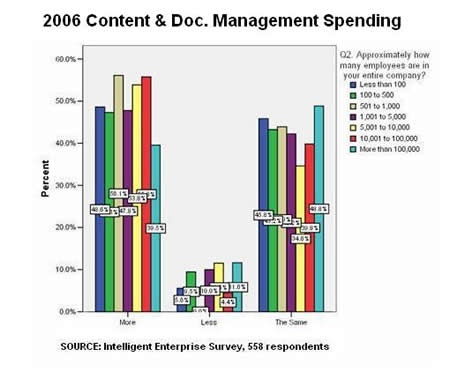 In an analysis drilling down on budget plans across 28 technology categories, respondents ranked "content and document management" second, with 50.2 percent saying they would spend more in 2006 ("security, privacy and identity management" was first, with 51.2 percent of respondents planning to spend more). An analysis by company size (see "2006 Content & Document Management Spending" at left) shows a fairly even distribution, with the exception of the very largest firms (more than 100,000 employees), which have less-aggressive-but-still-healthy plans to spend more on the category.

Why the increased interest in document and content management? One possible explanation could be found in the fact that 50 percent of respondents confessed their firms make poor decisions because users can't get enough good information. Ranking various sentiments on a scale of one for disagree strongly to five for agree strongly, 36 percent of respondents (the largest share) were neutral on the statement "our company has selected an enterprise content management standard and is consolidating on that platform." Meanwhile, 32 percent agreed somewhat with the statement "our content control needs are basic and are addressed by network directories, intranets, basic document management and/or portals." And 33 percent agreed somewhat with the statement "we're moving toward XML-based management and reuse of content across applications, departments and channels of communication." 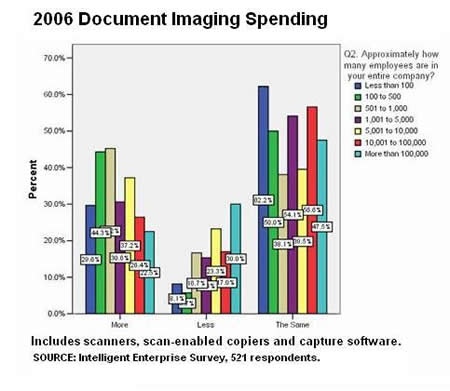 Document imaging ranked 18th among the 28 categories in the budget analysis, with 32.4 percent of all respondents saying they would spend more in 2006. A breakdown by company size (see "2006 Document Imaging Spending Plans" at right) shows that smaller firms plan to spend more, with 45 percent of respondents from companies with 100 to 500 employees and 44 percent of those from firms with 501 to 1,000 employees saying they had budgeted more on imaging (including scanners, scan-enabled copiers and capture software). Conversely, 30 percent of respondents from large firms (more than 100,000 employees) said they would spend less on imaging in 2006.

Are big companies eliminating paper-based transactions altogether? Perhaps smaller firms are buying into imaging because they are less able to influence customers and business partners to move away from paper? The study doesn't point to a clear explanation, but the trend is anecdotally confirmed by sales dynamics in the scanner market. Over the last three years, sales of workgroup scanners — those costing less than $2,000 and scanning at 10 to 25 pages per minute — have outgrown all other categories, increasing more than 200 percent, according to Infotrends/CAPventures. Although companies of any size could use these scanners, they tend to be favored by small and midsize companies dealing with lower volumes of documents.

Respondents to the "Intelligent Enterprise Strategic Management Survey" included both business and IT readers. Corporate and line-of-business executives accounted for 23 percent of the respondents. The majority of respondents were CIOs and other IT executives, information and application managers, and service providers to the IT function. The survey drew respondents from organizations of all sizes and across a range of industries. A complete analysis will appear in the January issue of Intelligent Enterprise, and complete demographic details will be available at www.IntelligentEnterprise.com.