This is the moment space geeks have been waiting for since Juno entered Jupiter's orbit earlier this month. The NASA spacecraft has sent back the first image of the gas giant -- the solar system's largest planet -- with the best pictures yet to come.

NASA's Juno spacecraft has sent back its first in-orbit view of Jupiter -- the solar system's largest planet -- as well as three images of the of the massive planet's largest moons.

The image was captured when the spacecraft was 2.7 million miles from Jupiter on the outbound leg of its initial 53.5-day capture orbit. However, NASA researchers noted that high-resolution images of the planet were still a few weeks away.

Notable on the photograph are atmospheric features on Jupiter, including the famous Great Red Spot, and three of the four Galilean satellites: volcanic Io, icy Europa, and asteroid-scarred Ganymede, the planet's largest moon. (Callisto is the fourth moon in that group.)

The space agency hopes Juno will improve our understanding of the solar system's beginnings by revealing the origin and evolution of Jupiter. 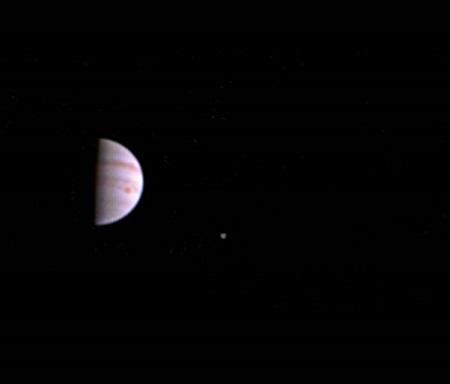 With its suite of science instruments, Juno will investigate the existence of a solid planetary core, map Jupiter's intense magnetic field, measure the amount of water and ammonia in the deep atmosphere, and observe the planet's auroras.

During its mission of exploration, Juno will circle the Jovian world 37 times, soaring low over the planet's cloud tops -- as close as about 2,600 miles, providing the world with a far closer look at Jupiter than has ever been seen before.

"This scene from JunoCam indicates it survived its first pass through Jupiter's extreme radiation environment without any degradation and is ready to take on Jupiter," Scott Bolton, principal investigator from the Southwest Research Institute in San Antonio, Texas, wrote in a July 12 statement. "We can't wait to see the first view of Jupiter's poles."

JunoCam is a color, visible-light camera designed to capture remarkable pictures of Jupiter's poles and cloud tops. It will provide a wide view that gives context for the spacecraft's other instruments.

Aww snap. My first in-orbit view of #Jupiter. Getting up close and personal again on Aug 27. https://t.co/Xw4VHVO6rJ pic.twitter.com/b2FuTpriKf

Incredibly, the camera was included on the spacecraft specifically for purposes of public engagement. While the images will be helpful to the science team, it is not considered one of the mission's science instruments.

[Read how NASA is struggling with budget overruns when it comes to software development.]

To give you a sense of scale, the hexagonal spacecraft is about 11.5-feet tall, and Jupiter is larger than all of the other planets in the solar system combined.

The Great Red Spot -- a massive anti-cyclonic storm that has been raging for centuries -- is the size of three Earths.

The Juno team is currently working to place all images taken by JunoCam on the mission's website, where the public can access them.

"JunoCam will continue to take images as we go around in this first orbit," Candy Hansen, Juno co-investigator from the Planetary Science Institute in Tucson, Ariz., wrote in Tuesday's statement. "The first high-resolution images of the planet will be taken on August 27 when Juno makes its next close pass to Jupiter."

When the mission is over, Juno will meet its appropriately spectacular fate, when it makes a deorbit burn to prepare for EOM (end of mission) via destructive entry into the gas giant.

After the mission has ended, NASA scientists perform will perform two years of data analysis gathered from Juno's 33 science orbits, and the public will have the benefit of seeing the most astounding views of Jupiter ever seen.

Nathan Eddy is a freelance writer for InformationWeek. He has written for Popular Mechanics, Sales & Marketing Management Magazine, FierceMarkets, and CRN, among others. In 2012 he made his first documentary film, The Absent Column. He currently lives in Berlin. View Full Bio
We welcome your comments on this topic on our social media channels, or [contact us directly] with questions about the site.
Comment  |
Email This  |
Print  |
RSS
More Insights
Webcasts
Monitoring the Invisible - Digital Experiences in a Zero Trust World
Fact or Fiction? The Truth About Cloud Native Security
More Webcasts
White Papers
Using Zero Trust to Protect Today's Remote Workforce
Business Continuity Program Best Practices Checklist
More White Papers
Reports
State of the Intelligent Information Management Industry in 2021
The State of Malware Threats
More Reports