NASA on Wednesday cited electrical problems as it pushed back the last launch of space shuttle Discovery. Discovery, the oldest spacecraft in the space agency's shuttle fleet, is now slated to lift off from Florida's Kennedy Space Center on Thursday. 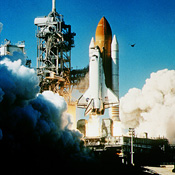 "The Prelaunch Mission Management Team wants to give engineers more time to look deeply into two electrical issues from a main engine computer controller that cropped up this morning," NASA officials said, in a statement.

The shuttle was originally scheduled to launch Monday, but NASA officials scrubbed the plan after detecting a helium leak. Discovery's current launch window, the period during which the spacecraft is in position to dock with the ISS, runs through Sunday.

The shuttle program is expected to end in February when Endeavour takes to the skies for the final time. President Obama earlier this year ordered NASA to turn over low-orbit flights to private contractors and focus more on deep space missions and research. Critics of the plan claim it will cost jobs along Florida's Spacecoast and in other states that support the shuttle program. They also say it could leave the U.S. lagging behind Russia and China in the space race.

We welcome your comments on this topic on our social media channels, or [contact us directly] with questions about the site.
Comment  |
Email This  |
Print  |
RSS
More Insights
Webcasts
Cloud Security Threats Enterprises Need to Watch
Are You Ready for When Cyber Attackers Get In?
More Webcasts
White Papers
Using AI to Power AppSec
[IT Trend Report] The Future of Cloud
More White Papers
Reports
Can You Spare 10-12 Mins to Help Us Out with a Survey on Tech Trends?
Got 7 Minutes? Dark Reading Needs Your Help With Our Survey on Incident Response
More Reports