50%
Tweet
Iconoclastic technology leader argues change management must start with IT itself.

When I met him in April at Consero's Higher Education Technology Forum, an invitation-only event in San Diego I was allowed to audit, he stood out from the crowd by being the person who always seemed ready to say, "I completely disagree."

His opinion might or might not be completely contrary, but it was often off on a significantly different tangent. He espouses a philosophy of leading change by living it.

Davis also has a reputation as a turn-around artist, having rehabilitated a failing IT department at Bowdoin, a liberal arts college in Brunswick, Maine, where client satisfaction scores from faculty and staff rose from 10% to 95% within two years of his arrival. When he and a couple of other CIOs led a discussion on turnarounds at the Consero event, Davis cited his experience as CIO of Stanford Law School in the late 1990s as the place he made his bones. "I fired everybody," he said. "They were hiring people they liked, rather than people who were competent." (Technically, the people were laid off, not fired, he told me later, but "when I was done it was just me and a temp.")

The way he took a different tack on every issue was what caught my attention the most. While others sorted through the complexities of bring-your-own-device policies and supporting a variety of mobile operating systems, for example, he suggested it was far simpler to just provide iPads. He dismissed talk about the disruptive potential of massive open online courses as overblown, telling me later that MOOCs are "just an add-on to things we have been doing in the past." 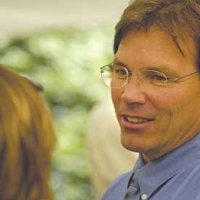 The pattern was pronounced enough that, over dinner, one of the other CIOs turned to me and said something to the effect of, "So, have you noticed that in every discussion, we have a pretty good meeting of the minds -- except for this one person who disagrees with all the rest of us?" Of course, she was talking about Davis. The tone was more amused than hostile, but I gathered his comments might be the subject of a certain amount of eye-rolling.

Even so, he was popular enough and in the thick of so many discussions that it wasn't until the last day of the event that I got a few minutes alone with him. When I asked him about his reputation within the group, he insisted he wasn't just trying to be contrary. "The people I argue with, I respect. But if you don't challenge ideas, they're not tested," he said.

Still, Davis does relish his reputation as a change agent. "My president said hiring me was the biggest risk he ever took -- he thought I was going to blow the whole place up," he said.

Getting him to talk about himself was not hard, and over the next few minutes I was treated to such a rapid-fire recital of his accomplishments at Bowdoin, at Stanford, and in a previous gig as an assistant dean in charge of IT at the University of Oregon School of Law that months later the burning questions I had for his references were, "Is he for real?" and "Is this someone with a raging ego?"

"It's a fair question -- there are a lot of people you see out there who have good PR," said Dan Roberts, president of the IT professional development consulting firm Ouellette & Associates, who cited the turnaround Davis executed in Bowdoin in his book Unleashing the Power of IT. There are CIOs who are talented at getting themselves on magazine covers but little else, but Davis is not one of them, said Roberts. His consulting firm helped train Bowdoin staff on delivering better service, but Davis already had the right vision. "I think he had the whole package."

However, on first impressions, people aren't always sure what to make of him, Roberts conceded. "He's a personality -- everyone around him will tell you that."

"People think he's arrogant," said Rebecca Sandlin, who worked with Davis at Bowdoin and has since moved on to a CIO position at Roanoke College. She thought he was arrogant, too, when she first met him. At least, she thought he might be. She wondered, too, if he was purposely contrarian, willing to say the opposite of what others thought just to get a reaction. Because she was willing to give him a chance to prove otherwise, she came to see him as someone "who really believes change is essential in our industry," she said. "It really bothers him when people think, 'This is the status quo, the status quo works, and why would we change?'"

In other words, she recognized there was a method to his madness. Further, it turned out that he was not so arrogant that he didn't listen to what others had to say. "People who are arrogant do not respond well to criticism. They tend to be incredibly thin-skinned. As employees and coworkers, it's very difficult to give them constructive criticism," Sandlin said. "Mitch enjoys it when people go after him and tear apart all of his ideas."

Comment  |
Email This  |
Print  |
RSS
More Insights
Webcasts
Enterprise Database Strategies for 2020
Now That Ransomware Has Gone Nuclear, How Can You Avoid Becoming the Next Victim?
More Webcasts
White Papers
DevOps for the Database
2020 State of Malware Report
More White Papers
Reports
Online Threats -- and What Your Org Can Do About Them
[Special Report] Remote Network Management
More Reports

I'm sure he's got to have his critics, starting with those people he laid off at Stanford and some who decided not to stick around at Bowdoin. Those who admire him see him as someone who challenges people in a positive way, making them uncomfortable with mediocrity rather than just plain uncomfortable.
Reply  |  Post Message  |  Messages List  |  Start a Board

I don't know--an executive whose goal is to "make work a little uncomfortable every day, for everybody" sounds a bit toxic to me, regardless of the results he may be generating.
Reply  |  Post Message  |  Messages List  |  Start a Board

Great article! I always rely on Mitch to challenge my thinking. His leadership style may not fit neatly into some leadership book, but it surely fits with Bowdoin.
Reply  |  Post Message  |  Messages List  |  Start a Board

Bowdoin's President Barry Mills said the Davis was "probably both right and wrong" about MOOCs being overhyped. They actually are talking about the right way for the college to engage in the phenomenon, but they want to do it thoughtfully.

I enjoyed taking the time to do a profile where I talked to more of the
people around him, rather than just the man himself, but the side effect
was I wound up with more material than I could fit into the article.
Better too much than too little.

One of the interesting things about Mitch Davis is that he is willing to play devil's advocate for the sake of getting a conversation going. The fact that he stakes out a definite position (and asks you to prove him wrong, if you can) does not mean that he has stopped thinking about different possible answers.

I like Davis's straightforward approach, but I wonder whether he's underestimating the potential of MOOCs. "Just an add-on to the things we've been doing in the past"? Consider the high-profile case of Georgia Tech now offering a MOOC-based online master's degree in computer science for about a fifth of the usual cost. Seems like more than an add-on.
Reply  |  Post Message  |  Messages List  |  Start a Board

As someone who has been doing Toastmasters for a couple of years, I was interested in the emphasis Davis put on communication and presentation skills.

One pithy quote I meant to use but didn't is that you should "be the person who says the thing that changes people's minds."
Reply  |  Post Message  |  Messages List  |  Start a Board

I have also asked Mitch Davis to contribute to this section as a columnist, partly because he thinks differently and would start some good discussions.
Reply  |  Post Message  |  Messages List  |  Start a Board
Editors' Choice
Hot Topics